For waters separating Sicily from Italy, see Strait of Messina. 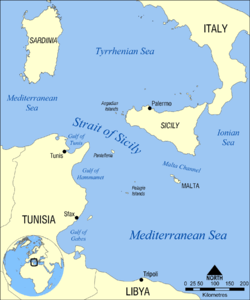 The Strait of Sicily (also known as Sicilian Strait, Sicilian Channel, Channel of Sicily, Sicilian Narrows and Pantelleria Channel; Italian: Canale di Sicilia or the Stretto di Sicilia; Sicilian: Canali di Sicilia or Strittu di Sicilia) is the strait between Sicily and Tunisia.[1][2] The strait is about 145 kilometres (90 mi) wide and divides the Tyrrhenian Sea and the western Mediterranean Sea, from the eastern Mediterranean Sea. The maximum depth is 316 meters (1,037 ft).

Deep currents in the strait flow from east to west, and the current nearer the surface travels from west to east. This unusual water flow is of interest to oceanographers.

The island of Pantelleria lies in the middle of the strait.