pronunciation ) is a municipality and town in the southern Netherlands, in the province of North Brabant. It consists of an area of 101.73 km2 (39.28 sq mi) and had a population of 18,279 in 2014. It is one of 21 municipalities, including Eindhoven, that make up the Eindhoven Region Cooperative (Samenwerkingsverband Regio Eindhoven).

The spoken language is Kempenlands (an East Brabantian dialect, which is very similar to colloquial Dutch).[5]

Until 1998 it had the old-fashioned spelling of "Bergeyk". Bergeijk is traditionally an agricultural area, but tourism and recreation are steadily gaining importance. Among the facilities in the municipality of Bergeijk is a bungalow park in the village Westerhoven.

Bergeijk is known in the Netherlands for a program on national radio: Radio Bergeijk, a parody on local radio. 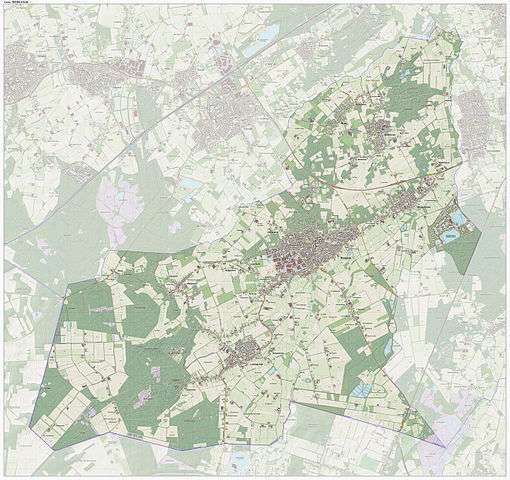 Topographic map of the municipality of Bergeijk, June 2015.

This article is issued from Wikipedia - version of the 2/10/2016. The text is available under the Creative Commons Attribution/Share Alike but additional terms may apply for the media files.