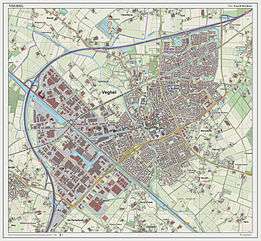 Topographic map of Veghel (town), as of March 2014 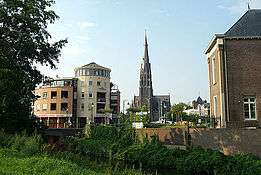 Aa river in front of the Saint Lambert Church in Veghel

Veghel (Dutch pronunciation: [ˈvɛxəl]) is a municipality and a town in the southern Netherlands.

The first settlements date back to Roman times and were established near the River Aa. The oldest written record of Veghel dates from 1225. It is a document of the Abbey of Berne, written in Latin on a piece of parchment, and describes several properties owned by the abbey. Among those is an estate located in the settlement of "Vehchele".

In 1310, John II of Brabant granted the inhabitants the right to use common grounds. For some decades in the 16th and 17th century the municipality was ruled by the Lords Van Erp, residing at their castle of Frisselsteijn in Veghel.

In 1648 Veghel became part of the Republic of the Seven United Netherlands. As a former part of the Duchy of Brabant, Veghel is situated in the Meierij of 's-Hertogenbosch. As a Catholic town, Veghel (like all the other areas of Brabant and Limburg which were transferred to the Netherlands by the Peace of Westphalia) suffered economic and religious oppression from the Protestant Dutch and was part of the military buffer zone of the Dutch Republic.

In 1719 Veghel became a market town, when it was granted market rights by the States General of the Netherlands, receiving the privilege of holding weekly markets and four annual fairs. However, it was not until the French wars of 1795 that Veghel formally received freedom of religion again and received a guarantee of full common rights from the Dutch government. In 1810 Veghel became part of the Kingdom of the Netherlands. From the middle of the 19th century the agrarian market town began developing into an industrial town as a consequence of the opening of the South Willem's Canal. The construction of large-scale buildings like the neogothic church by Pierre Cuypers and the neoclassical town hall dates from that period. Monastic orders made Veghel a regional centre of health care and education, which it remains to this day.

In 1940 Veghel was occupied by German troops. With the beginning of Operation Market Garden in 1944 Veghel was one of the dropping-places for Allied paratroops owing to its strategic location.

The period since the 1950s has seen much growth, with the development of new industries and the establishment in Veghel of several international companies (e.g. Mars, Incorporated, FrieslandCampina, DMV International, Agrifirm, Kuehne + Nagel, DHL Supply Chain, Alliance Healthcare, ThyssenKrupp and Vanderlande Industries). Its shopping centre and marketplace earned the town the name of "Pearl of the Meierij". Veghel is an educational centre for the surrounding district with several secondary schools, a senior secondary vocational school, and one of the oldest higher vocational schools in the area: the Pedagogic Academy, which was founded in 1872.

Since 1994, Veghel and the neighbouring town of Erp have formed a single municipality.

The spoken language by the native population is North Meierijs (an East Brabantian dialect, which is very similar to colloquial Dutch).[8]

Veghel is twinned with: