For the American actress, see Katherine Helmond.
For for the Afghan Province, see Helmand Province. 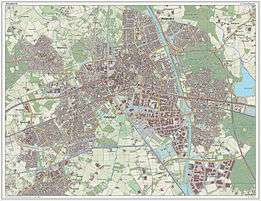 Helmond (Dutch pronunciation: [ˈɦɛlmɔnt]; called Héllemond in the local dialect) is a municipality and a city in the province of North Brabant in the southern Netherlands.

Helmond has many textile companies. The Vlisco factory is located next to the Zuid-Willemsvaart canal which runs through the city.[5]

The name 'Helmond' can be traced back to a combination of Hel, which means "low-lying" (from Proto-Germanic *haljæ / contemporary Hel), and Mond, which would refer to a higher ground, secure place. The name has nothing to do with the contemporary literal translation of Hell Mouth.[6] In 1241 a first coat of arms was created, containing a helmet as a reference to the word Helmond, since this early in history the historical meaning of the city name was already lost to its inhabitants. This helmet would symbolize the fortified medieval town. Originally a medieval pot helmet, this was later adapted to a new fashion style and is now a tournament helmet. The oak branches symbolizing freedom. The bird in the branches is a medieval decoration and has no meaning.

The spoken language is Helmonds (an East Brabantian dialect).[7]

Helmond is subdivided into quarters and neighbourhoods:[8]

First settlements in the area were around 1000, and Helmond was granted city rights in approximately 1232. The centre of Helmond has a castle which was built by Jan III van Berlaer around 1350.

The municipal council consists of 37 seats. Below the council since 1998:

Helmond is twinned with: