pronunciation ) is a municipality in the southern Netherlands. 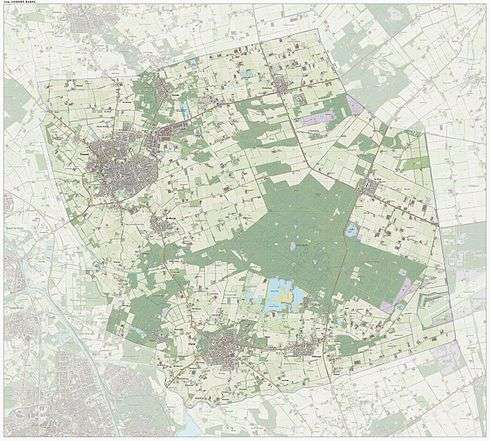 Dutch Topographic map of the municipality of Gemert-Bakel, June 2015

Climate in this area has mild differences between highs and lows, and there is adequate rainfall year round. The Köppen Climate Classification subtype for this climate is "Cfb". (Marine West Coast Climate/Oceanic climate).[6]

In the centre of Gemert stands a castle of which the oldest parts date back to the Late Middle Ages, although it has been rebuilt a couple of times. It was founded by German knights who lived in the castle for several hundred years, however these days it is occupied by monks and nuns. The predecessor of this castle was a motte-and-bailey located further to the west and was discovered in 1995. It is said that the townfounder Diederik van Gemert lived here.

Humanist Georgius Macropedius is one of the notable people to have been born in Gemert, and a school and park have been named after him.

The spoken language is Peellands (an East Brabantian dialect, which is very similar to colloquial Dutch).[8]