pronunciation ) is a municipality in the southern Netherlands, in the province of North Brabant. The municipality was created from the two former municipalities of Geldrop and Mierlo on 1 January 2004.

Geldrop-Mierlo had a population of 38,809 in 2014. It covers an area of 31.39 km2 (12.12 sq mi). The two villages of Geldrop and Mierlo used to be separate municipalities, but joined together after threats from Helmond to take over Mierlo. Its partner city is Dobříš in the Czech Republic. 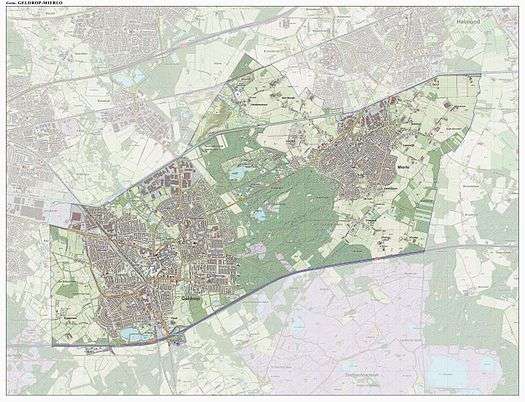 Dutch topographic map of the municipality of Geldrop-Mierlo, June 2015

The exact age of Geldrop isn't known. Over the years there have been several archaeological finds relating to prehistoric peoples who lived in or passed through the area. In the area of Geldrop, where over 10,000 years ago reindeerhunters of the so-called Ahrensburg culture placed their tents, two {?} with engravings have been found, among other artefacts. On one of them a reindeerhorn have been represented, on the other one a dancing little girl, who is called 'venus van Mierlo'. In the south of Zesgehuchten (district of Geldrop) finds have been done which indicate on small settlements from the New Stone Age (round 3000 BC). Finds from the Roman Time and the early Middle Ages have been found off Genoenhuis and Hoog Geldrop (districts in Geldrop). In the autumn of 1989 nearby 't Zand (cemetery) archaeological unearthings has been carried out. These had a remarkable result. Four settlements were found from the late Roman Time and the Middle Ages: a period which covers the years between 350 and 1225.