Brimstage (local /ˈbrɪmstɪdʒ/) is a village located in the centremost part[3] of the Wirral Peninsula, England, east of Heswall and west of Bebington. The village is located in the Clatterbridge Ward of the Metropolitan Borough of Wirral and in the parliamentary constituency of Wirral South. At the time of the 2001 Census, Brimstage had a population of 100.[1]

Although the exact date of construction is unknown, Brimstage Hall is believed to have been built between the 12th century and 14th century, making it one of the oldest buildings on Merseyside.[3][4] Originally the site was enclosed by a moat and high embankment. The building's first known occupants were Sir Hugh Hulse and his wife, who were granted the right to construct a chapel in 1398.

Brimstage was the home of the Domville family, who arrived with William the Conqueror. The seventh Lord of Oxton, third Lord of Brimstage, Sir Roger de Domville, 'listened for the word Brunstath' (the old name for Brimstage) during proceedings at Chester. He was to go to meet his wife Isobel, at his home, Brimstage Hall. The year was 1288. There is a male descendency from the time of William the Conqueror for the Domvilles which is continued today (2013). The family were to leave the hall when the Hulse family took residence circa 1378.

Brimstage was formerly a township in Bromborough Parish of the Wirral Hundred. The population was 127 in 1801, 126 in 1851, 181 in 1901 and 135 in 1951.[5] On 1 April 1974, local government reorganisation in England and Wales resulted in most of Wirral, including Brimstage, transfer from the county of Cheshire to Merseyside as part of the Metropolitan Borough of Wirral. 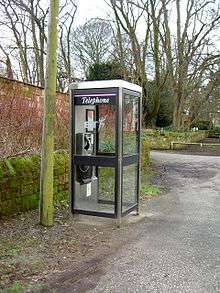 Brimstage is a rural community centred on a small village green, consisting of Brimstage Hall, numerous farms and a small number of dwellings. Brimstage Hall and the surrounding Courtyard hosts a vibrant retail community which includes these retailers.

In 2006 the former dairy at Home farm was refurbished to become the home of Brimstage Brewery - Wirral's first commercial brewery since the closure of Birkenhead Brewery in the 1960s.[7]

Brimstage, along with the neighbouring villages of Raby and Thornton Hough, are within an Area of Special Landscape Value, a protective designation to preserve the character and appearance of the area. This is part of the Wirral Unitary Development Plan of the Metropolitan Borough of Wirral.[8]

Services operating along Brimstage Road and Talbot Avenue to the west of the village as of 2015: