Caldy is a small, affluent village on the Wirral Peninsula, England, located to the south east of West Kirby. It is part of the West Kirby & Thurstaston Ward of the Metropolitan Borough of Wirral and is situated in the parliamentary constituency of Wirral West. At the time of the 2001 Census, Caldy had 1,290 inhabitants,[1] of a total ward population of 12,869.[3]

It was first mentioned in the Domesday Book in 1086 as being owned by Hugh of Mere. Nearby is a large area of National Trust land called Caldy Hill. Many of the houses and walls in the village centre are built from the local red sandstone.

Caldy was a township in the West Kirby Parish of the Wirral Hundred. The population was 92 in 1801, 142 in 1851, 202 in 1901 and 607 in 1951.[4] Until the twentieth century, Caldy was effectively a farming and agricultural village. However, The Caldy Manor Estates Company divided the land into smaller building plots, and from here one of the north of England's most exclusive residential village emerged.[5] Between 1894 and 1933, Caldy was part of Wirral Rural District, then subsequently Wirral Urban District. On 1 April 1974, local government reorganisation in England and Wales resulted in most of Wirral, including Caldy, transfer from the county of Cheshire to Merseyside.

Caldy railway station was situated on the Hooton to West Kirby branch of the Chester and Birkenhead Railway. The station closed in 1954 and the trackbed is now the 'Wirral Way' of Wirral Country Park.

Caldy lies on the western side of the Wirral Peninsula, and is situated on the eastern side of the Dee Estuary. The village is approximately 3.5 km (2.2 mi) south-south-east of the Irish Sea at Hoylake and about 11 km (6.8 mi) west-south-west of the River Mersey at Woodside. The centre of the village is situated at an elevation of about 44 m (144 ft) above sea level.[6]

Caldy Rugby Football Club, a rugby union club, play at Paton Field in nearby Thurstaston. The team currently compete in National League 2 North, the fourth tier of the rugby union pyramid in England.

Caldy Cricket Club play at Paton Field in nearby Thurstaston in the summer months. They currently field four Saturday teams in the Liverpool and District Cricket Competition. 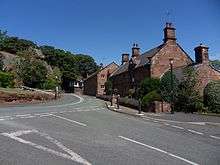 The B5140 at the junction with Croft Drive

Services operating in the Caldy area, as of January 2014:

The nearest railway station to Caldy is West Kirby, on the Wirral Line of the Merseyrail network after it lost its own station in 1954.

Caldy is noted for having many well-known residents, particularly those connected to professional football, such as Robbie Fowler[7] and Rafael Benítez. Rafael Benitez in a press conference referred to 'John the milkman' in the Wirral while launching cryptic attack on previous Liverpool club owner Tom Hicks and managing director Christian Purslow.[8]

The poet and novelist Malcolm Lowry lived in Caldy as a child, and the science fiction author Olaf Stapledon lived in Caldy from 1940 until his death in 1950.