Not to be confused with Liskeard.

Liscard is an area of the town of Wallasey, in the Metropolitan Borough of Wirral, Merseyside, England. The most centrally located of Wallasey's townships, it is the main shopping area of the town, with many shops located in the Cherry Tree Shopping Centre. At the 2001 Census the population was recorded at 14,301,[2] increasing to 15,574 at the 2011 Census.[3] 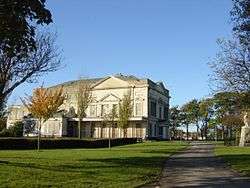 Liscard Hall was built in 1835 by a Liverpool merchant, Sir John Tobin. Its grounds later became Central Park, and the building itself later became an art college. A “model farm” was also developed nearby by his family. The former Grade II listed arts building within the grounds of Central Park was destroyed by fire on 7 July 2008,[6] and has been completely demolished.[7] The decision has not yet been made as to what will be done with the site. 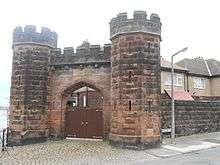 Gateway to the former Battery compound

Liscard Battery was built in 1858 to help protect shipping on the River Mersey and defend the port of Liverpool. It was equipped with seven 10-inch guns. Set back from the river and hidden by new building, it was known as "the snake in the grass" to local inhabitants. The battery was obsolete by 1912, and sold on, and houses were erected on top, and now the site has an odd appearance with only the curtain wall and ornate crenellated gatehouse surviving to this day.

Liscard is in the north-eastern part of the Wirral Peninsula, less than 2.5 km (1.6 mi) south-south-east of the Irish Sea at New Brighton, about 11 km (6.8 mi) east-north-east of the Dee Estuary at West Kirby and about 1 km (0.62 mi) west-north-west of the River Mersey at Egremont. Liscard is situated at an elevation of around 35 m (115 ft) above sea level.[8]

Liscard is part of the Wallasey parliamentary constituency and represented since 1992 by Angela Eagle, a Labour Party MP, who retained her seat in the 2015 general election.

The area is also a local government ward of the Metropolitan Borough of Wirral, taking in the majority of Egremont, and is represented by three Labour Party councillors DaNiel Matthew, Bernie Mooney and Janette Williamson. The most recent local elections took place on 3 May 2012.

The area is largely residential and contains mainly high-density semi-detached and terraced housing. Central Park is now the largest park in Wallasey, It has two areas for young children, with swings, slides and other games, large areas of greenery and a popular walled garden. There is also a cricket ground and a large duck pond. It links Liscard to Poulton and Egremont.

Liscard includes the Oldershaw School, a secondary school with specialist status as a Business and Enterprise College and Liscard Primary School.