Pensby (local /ˈpɛnzbi/) is a large village on the Wirral Peninsula in Merseyside, England, north east of Heswall. Historically part of Cheshire, it is in the Pensby and Thingwall Ward of the Wirral and the parliamentary constituency of Wirral West. At the 2011 Census, the population of the ward was 13,007.[2]

The name Pensby comes from Old Norse, meaning a village or settlement at a hill called "Penn".[3] The "by" suffix, included in neighbouring place names such as Frankby, Greasby, and Irby, is Viking in origin.

Lower Pensby was previously known as Newtown. This was due to the building of new houses around the turn of the twentieth century at the crossroads of Pensby Road and Gills Lane.[5]

On 1 April 1974, local government reorganisation in England and Wales resulted in most of Wirral, including Pensby, transfer from the county of Cheshire to Merseyside.

The area is also part of a local government ward of the Metropolitan Borough of Wirral, this being Pensby and Thingwall Ward. Pensby is represented on Wirral Metropolitan Borough Council by three councillors. These are Phillip Brightmore, Louise Reecejones and Michael Sullivan, who are all Labour councillors.[6] The most recent local elections took place on 22 May 2014. 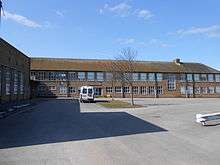 St. Michael and All Angels Church is a Church of England building on Gills Lane. The Emmanuel Holiness Church is an independent Evangelical ministry which is on Heswall Mount. The Holy Family Catholic Church is on Pensby Road. 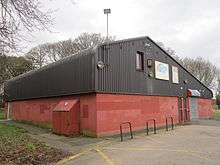 The Hope Centre on Fishers Lane

Pensby has two community centres, the Hope Centre, adjoining Ridgewood Park on Fishers Lane, and the Kylemore Drive Community Centre. There is also an adult day centre on Somerset Road. Pensby Library is on Pensby Road. The 3rd Heswall Scout group is also based in Pensby.[9]

The Pensby Hotel was the single pub in the village, but after a £500,000 cannabis bust by police, was boarded up and left empty after October 2013. There was a campaign for the building to be listed as a community asset, meaning that the community would have been given six months to prepare a bid for it, which may or may not have been accepted by the owner, but community asset status was rejected by Wirral Council in September 2015. Planning permission was subsequently granted for the demolition of the building and construction of the new care home, and demolition began in October 2016.

Pensby Wood and Ridgewood Park are adjacent to Fishers Lane. Arrowe Park is approximately half a mile (1 kilometre) north of Pensby.

The famous Everton FC footballer Dixie Dean played for Pensby Institute in his early days, on the fields at the side of Gills Lane. He was sold to Tranmere Rovers for the fee of a new kit for the team.[10][11]

Pensby recreation centre and bowling club is on Pensby Road.

Services operating in the Pensby area, as of January 2015:

The nearest station is Heswall.