Greasby (local /ˈɡriːzbi/) is a large village on the Wirral Peninsula, Merseyside, England. It is part of the Greasby, Frankby & Irby Ward of the Metropolitan Borough of Wirral and is situated in the parliamentary constituency of Wirral West. At the 2001 Census, Greasby had 9,830 inhabitants,[2] with the total population of the ward at 14,667.[3] At the Census in 2011 the population of Greasby was not measured. However the ward had a total population of 13,991.[4]

The restored pump, on the corner of Pump Lane.

The earliest known human settlement in Merseyside has been found at Greasby, dating from approximately 7000 BC. A rectangular floor of sandstone slabs and pebbles suggests regular use by the nomadic hunters of that period.[5] National Museums Liverpool archaeologists excavated the site between 1987 and 1990.[6]

Greasby was an Anglo Saxon settlement, as witnessed by the form of the name, Gravesberie, in the Domesday Book.[7] Gravesberie derives from the Old English gräf and burh, recorded as meaning a "stronghold by a grove, trench, canal or wood". The name was Scandinavianised to Greasby, under the influence of Old Norse speakers in Wirral (gräf and býr,[8] with býr meaning "settlement" or "farmstead").[9]

Prior to the Norman conquest of England in 1066, Greasby was owned by a man named Dunning, who may have been an official (bailiff or steward) for the earls of Mercia.[10] After the invasion, all land in the area passed to Hugh d'Avranches.[11] By the time of the Domesday Book (1086), Greasby was under the ownership of Nigel de Burcy.[7]

After the Second World War the area expanded considerably, with significant residential development across previously agricultural land. This has resulted in Greasby becoming contiguous with the nearby settlements of Moreton, Upton and Woodchurch.[12]

From 1866 Greasby was part of Wirral Rural Sanitary District, which was replaced in 1894 by Wirral Rural District. In 1933 the village transferred to Hoylake Urban District.[15]

Greasby is bounded by Arrowe Brook, at Upton Meadow, and by Greasby Brook which flows around the western and northern sides of Greasby. Greasby Brook merges into Arrowe Brook between Greasby and Saughall Massie, which becomes a tributary of the Birket.

Greasby is also part of a local government ward of the Metropolitan Borough of Wirral, this being Greasby, Frankby and Irby Ward. Greasby is represented on Wirral Metropolitan Borough Council by three councillors. These are Tom Anderson, Wendy Clements and Mike Hornby, who are all Conservative councillors.[16] The most recent local elections took place on 22 May 2014.

The village contains a Post Office, a branch of The Co-operative Food, a Boots pharmacy, a branch of Age UK, a William Hill bookmaker and a BP petrol station. A Sainsbury's Local convenience store was opened on 8 October 2014, along with a veterinary surgery which opened on 6 October 2014.[19][20] These were opened in new retail units, after many parts of the local community opposed the construction of the new building.[20][21] Greasby also has a number of other small shops including a butchers, florist, greengrocer's, estate agents and a number of fast food takeaways.

Greasby has three churches, these being St. Nicholas' Church of England,[25] the Our Lady Of Pity Catholic Church,[26] and Greasby Methodist Church.[27]

The village has a library[28] and a community centre. These buildings are centrally situated and close together, along with the health centre. The Greasby Centre is a purpose-built single-storey building which has two halls.[29] This was built as Greasby Community Centre in 1984, and replaced an older building on Arrowe Road.[29] The 2nd Greasby Scout Group is also within the village, having been established in 1954.[30][31] 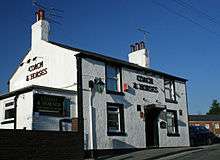 The Coach and Horses Inn, Greasby

There are five public houses in Greasby. The Coach and Horses is possibly the oldest pub, which was definitely in business by 1832, having been named on the Bryant map of that year, and possibly dating as far back as 1725.[32] The Red Cat was built in 1964 to replace the New Inn which had stood a few metres from the site of the present building since at least 1849.[32][33] The Twelfth Man opened around 1960 and was named as a result of its proximity to Upton cricket club.[32] This pub has an adjoining budget hotel which is part of the Premier Inn chain.[34] The Greave Dunning was an 18th-century farmhouse, and it was opened as a pub in 1981.[32] Ellies Bistro is a wine bar which opened in 2006.

Coronation Park is situated at the eastern end of the village. Upton Meadow borders Greasby to the east. Meanwhile, Arrowe Park borders to the south-east.

JFC Greasby are a youth football club based in Greasby, which was founded in 2009.[35] Greasby Livery caters for dressage and showjumping.[36] The community centre also has a karate club.[37] Greasby FC were a small football club, which played in the West Cheshire League between 1951 and 1958.[38]

Services operating in the Greasby area, as of December 2014: