Thornton Hough /ˈhʌf/ is a village on the Wirral Peninsula, in Merseyside, England, of pre-Conquest origins. The village grew during the ownership of Joseph Hirst into a small model village and was later acquired by William Lever.[3] Thornton Hough is roughly ten miles from Liverpool and ten miles from Chester and part of the Clatterbridge Ward of the Metropolitan Borough of Wirral in the parliamentary constituency of Wirral South. At the 2001 Census, Thornton Hough had 770 inhabitants[1] of a total of 16,906 people living within the Clatterbridge ward.[4]

Mentioned in the Domesday Book as Torintone, the name of the village was established when the daughter of local landowner Roger de Thorneton, married Richard de Hoghe during the reign of Edward II.[3] By the beginning of the 19th century, Thornton Hough formed part of the Neston Estate owned by Baron Mostyn of Mostyn, Flintshire. The population was 165 in 1801, 164 in 1851, 547 in 1901 and 506 in 1951.[5]

Joseph Hirst, a Yorkshire woollen millowner, bought farmland land in 1866 and began the development of a small model village, building a church, a school and 'Wilshaw Terrace'. The village was bought and expanded by William Lever who developed housing for family, estate workers and company staff in a similar way to Port Sunlight, building another shop, the school, a social club and the Congregational church. Development continued in the early 20th century.[3]

Thornton Hough is in the central part of the Wirral Peninsula, approximately 11 km (6.8 mi) south-south-east of the Irish Sea at Leasowe Lighthouse, 3.5 km (2.2 mi) north-east of the Dee Estuary at Parkgate and about 6 km (3.7 mi) west-south-west of the River Mersey at Bromborough. The centre of the village is situated at an elevation of between 50–55 m (164–180 ft) above sea level.[6] 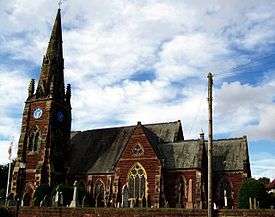 Thornton Hough and the villages of Brimstage and Raby are in an Area of Special Landscape Value, a protective designation to preserve the character and appearance of the area[7] There are 22 listed buildings in the village which was made a conservation area in 1979.[8]

Hirst employed Kirk and Sons of Huddersfield to design All Saints Church and its vicarage, a school and school master’s house and Wilshaw Terrace before 1870.[9] All Saints, the parish church, is a grade II listed building built in 1867, it has a spire and tower displaying five clock faces. The north transept window, designed by H. Gustave Hiller is a memorial to James Lever.[10][11]

Lever's architects used a wide variety of building materials including red and buff sandstone, brick, timber framing, render and pebbledash with roofs made of clay tiles or thick stone slates which creates the impression that the village appears to be older than it is. Lever used several architects, including John Douglas. The firm of Grayson & Ould designed the Village Club and Post Office, Weald House, several houses in The Folds and rebuilt Thornton House in 1895 and designed its lodges and stables. Jonathon Simpson built the Lever School and his son, James Lomax-Simpson, rebuilt the Smithy, designed D’Arcy Cottages and extensions to Thornton House. He also designed Saint George's United Reformed Church, a reproduction Romanesque style church in 1906.[12] William and Segar Owen designed various houses including Thicketford.

Thornton Hall, once the home of wealthy shipping merchants, the Bamford Brothers of Liverpool, is believed to have been built in the mid-1800s. It was transformed into a hotel in 1954 and many of its original features remain intact including oak carvings and the ornate mother of pearl embossed ceiling in the Italian Room.

Thornton Manor, built in an Elizabethan style dates from the 1840s, and was once the home of Lord Leverhulme. It is now a wedding venue and provides facilities for corporate functions.[13]

Thornton House, a grade II listed building built by Douglas & Fordham in 1893 is a two storey timber-framed house in a mock-Tudor style on a stone base.[14] Thicketford built in 1892 is preserved in a largely unaltered condition.

Hesketh Grange, a grade II listed building, was built in 1894 for Leverhulme's father.[15]

Thornton Hough was a township in the parish of Neston, part of the Wirral Hundred and became a civil parish in 1866. It was part of the Wirral Rural District in Cheshire from 1894 until it was superseded in 1933 by the Wirral Urban District. Further changes occurred on 1 April 1974, when local government reorganisation resulted in most of Wirral, including Thornton Hough, being transferred from the county of Cheshire to the Metropolitan Borough of Wirral in Merseyside.

Thornton Hough's central feature is the village green with its cricket pitch and pavilion, tennis courts, and a children's play area.

The local primary school is Thornton Hough Primary School located on St George's Way and is the catchment school for children living in Thornton Hough, Raby Mere, Raby and Brimstage. This school building was originally built to serve as a military building, but was turned over for school usage after the Second World War. The original playground has been reduced in size due to the building extensions of decking and garden areas.

The Parish Hall was the original village school until it closed in 1953, it has a Victorian exterior, although its interior has been updated. The Village Hall is a large extension to the original wooden hall belonging to St George's Church and was built in the 1970s by Collins Construction. It is referred to as the New Village Hall to set it apart from the Parish Hall which is used for the fortnightly youth club. Since it opened, the hall has been used for a variety of local events and as a venue for parties. The hall is used by the badminton club, play-school, Cubs, Scouts, Rainbows, Brownies and Guides.

The village has a number of shops and a post office next to which is the British Legion, known as "the Men's Club" as women were barred except for on two days per year. The Village Stores struggled to compete with the bigger and cheaper supermarkets before its closure in 2007. It is now Jennifer O'neill Cakes and Dragonfly Couture Stationery, 'The Seven Stars', is a traditional pub established in the 1840s on what was once a turnpike route between Birkenhead and Neston. In 1905 the smithy moved from its original site into a half timbered building and was extant in 2009.

A Punch and Judy show on the village green.

Just outside the village is The Westwood Grange Country Club, a restaurant/nightclub facility on the border of Thornton Hough and Neston.

The Thornton Hough Scarecrow Festival was held between 1999 and 2006. Residents participating made scarecrows of varying designs and quality, which were judged at the end of a week-long open season which attracted visitors from local areas. The festival also included a fête on the village green. The festival was not held between 2007 and 2010, but there are plans for a smaller scale revival in 2011.[16]