Due to a redefining of post towns by the Royal Mail in 2003, Noctorum is identified as being within Prenton (which is in fact a geographically separate suburb of Birkenhead), yet this was only a postal change and Noctorum itself still remains a part of Birkenhead. 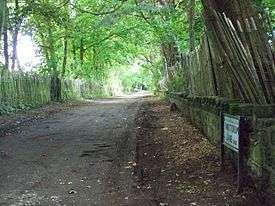 The name Noctorum is of Old Irish origin, originally Cnocc Tirim, meaning 'Dry Hill'.[3] This may be in reference to Bidston Hill, of which Noctorum is situated on its western slope. The name may long pre-date the Norse-Irish settlement in the early 10th century and go back to a Hibernian settlement of the west coast in the Sub-Roman period (early 5th century).

Noctorum appears as Chenoterie (Norman French) in the Domesday Book of 1086.[4] "Chêne" (French for oak) may be used here as in the Wirral hamlet of Landican (Old Welsh/Brythonic) called Landechene, the Oak Enclosure in the Norman French of the Doomsday Book.

Noctorum Lane is the site of Rathmore, a Grade II listed house designed by Edmund Kirby[5] and built in the 1880s.

Noctorum was a township of the parish of Woodchurch, in the Wirral Hundred. The population was 17 in 1801, 32 in 1851 and 212 in 1901.[6] It was added to Birkenhead civil parish in 1933 and part of the County Borough of Birkenhead, within the geographical county of Cheshire, until local government reorganisation on 1 April 1974.

Noctorum is in the northern part of the Wirral Peninsula, approximately 4.5 km (2.8 mi) south-south-east of the Irish Sea at Leasowe, 6.5 km (4.0 mi) east-north-east of the Dee Estuary at Caldy and 4 km (2.5 mi) west of the River Mersey at Tranmere. Noctorum is situated on the western side of the Bidston to Storeton ridge, with the area at an elevation of between 10–60 m (33–197 ft) above sea level.[7]

Ridgeway High School and the Discovery City Learning Centre (containing Ridgeway Library) is situated within this suburb. There is also a large council estate located here.

Upton railway station is the nearest station to Noctorum. It is located on the Borderlands Line between Bidston and Wrexham.