"DKF" redirects here. For the Dalaw Kalinga Foundation, see List of charities in the Philippines. 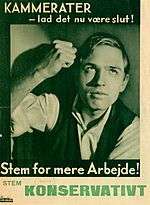 Election poster, 1939. It reads: Comrades - let it now be over! Vote for more work. Vote Conservative.

The party was founded 1916[6] based mostly on its predecessor, Højre (Right), but also on the Free Conservatives and a moderate faction of the liberal party Venstre.

The party has participated in several coalition governments, but only one Prime Minister of Denmark, Poul Schlüter, has come from this party, serving from 1982 to 1993.

In the 2011 parliamentary election for the Folketing (Danish national parliament), the Conservative People's Party won 8 seats, ten fewer than it had won in the previous election in 2007, and it received 4.9% of the vote, placing the party eighth place nationally.