The Counties of Denmark (Danish: Danmarks amter) were former subdivisions of metropolitan Denmark, used primarily for administrative regions, with each county having its own council with substantial powers. Originally there had been twenty-four counties, but the number was reduced to roughly fourteen in 1970 - the number fluctuated slightly over the next three decades. In 2006 there were thirteen traditional counties as well as three municipalities with county status (the island of Bornholm, which was a county from 1660 until 2002, became a regional municipality with county powers, but only briefly from 2003 until 2006). On January 1, 2007, the counties were abolished and replaced by five larger regions.

Copenhagen County comprised all the municipalities of Metropolitan Copenhagen, except Copenhagen Municipality and Frederiksberg Municipality which, on account of their peculiarity of being outside any of the traditional counties, had the equivalent of "county status". On January 1, 2007, these two municipalities lost their special status.

Greenland and the Faroe Islands are also part of the Danish Realm, but both enjoy internal autonomy. Both are largely self-governing, and each community sends two members to the Danish Parliament. The Faroe Islands obtained self-government in 1948; from 1816 to 1948 the islands had the status of a Danish county.

A government proposal in 2004 called for the counties to be abolished and replaced by five large regions with health care as their main responsibilities; two regions in Jutland, two regions in Zealand and one region covering Funen and the southernmost part of Jutland. The proposal also required the municipalities to merge reducing them from 271 to 98, with a minimum of 20,000 inhabitants in each municipality, although some exceptions were made to this rule. From 2007 25 municipalities have fewer than 30,000 inhabitants each, with the average number of inhabitants being over 55,500 per municipality. Only the United Kingdom and Ireland have more populous entities at the lowest political administrative level.

The reform was confirmed by the Danish Parliament on February 24, 2005, and the counties were abolished on January 1, 2007. 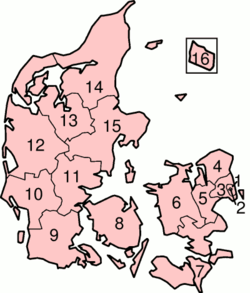 Note: Ringkjøbing County officially used a different spelling from its capital city, Ringkøbing. Ertholmene east of Bornholm are not and have never been a part of a municipality or county or (from 2007) region. Statistics Denmark calls them Christiansø and Frederiksø, named after the two inhabited islets.They are included in numbers for Denmark (92 inhabitants;0.39 square kilometers). Land area of Denmark: around 42394 square kilometers.