For other uses, see Frederiksberg Municipality and Fredriksberg (disambiguation).

Frederiksberg (Danish pronunciation: [fʁæðʁæɡ̊sˈb̥æɐ̯ˀ]) is a part of the Capital Region of Denmark. It is formally an independent municipality (town), Frederiksberg Municipality,[1] but is typically treated as a part of Copenhagen.[2][3] It occupies an area of less than 9 km2 and had a population of 103,192 in 2015.[4]

Frederiksberg is an enclave surrounded by Copenhagen Municipality and there is no clear border between the two. Some sources ambiguously refer to Frederiksberg as a quarter or neighbourhood of Copenhagen.[3] However, Frederiksberg has its own mayor and municipal council, and is fiercely independent.

Bombardment of 1807. Amager and the Øresund in the background, Frederiksberg Palace in the foreground to the right with soldiers with cannons

Julius Thomsens Square with St. Mark's Church in the background

Frederiksberg's original name was Tulehøj (= Thyle-hill),[5] indicating that a thul (= thyle) lived there, the reciter of eldritch times. The term is known from the Snoldelev rune stone.[6] In Beowulf, Unferth holds the same title. In Håvamål, Odin himself is referred to as "the old thul".[7] Thula translates as "song", like in the Rigsthula poem from the Edda. By 1443 the name Tulehøj was spelled Tulleshøy. It was regarded as Copenhagen's border to the west.[8] People lived here since the Bronze Age.

The history of Frederiksberg goes back to June 2, 1651 when King Frederik III gave 20 Danish—Dutch peasants the rights to settle at Allégade (= allé = tree-lined street, gade = street), and founded the town then named "Ny Amager" (= New Amager) or "Ny Hollænderby" (= New Dutchman-town). Farming was not very successful, and in 1697 most of the town burned down. This meant that the peasants were unable to pay taxes, and the land reverted to the crown by Frederik III's son Christian V.

In 1700-1703, King Frederik IV built a palace on top of the hill known as Valby Bakke (bakke = hill). He named the palace Frederichs Berg, and the rebuilt town at the foot of the hill consequently changed its name to Frederiksberg. A number of the local houses were bought by wealthy citizens of Copenhagen who did not farm the land, but rather used the properties as country houses.

The town changed slowly from a farming community to a merchant town, with craftsmen and merchants. During the summer rooms were offered for rent, and restaurants served food to the people of Copenhagen who had left the cramped city for the open land, and to be near the royals.

In 1852 Parliament removed restrictions which prohibited permanent construction outside Copenhagen's city walls. Almost immediately numerous residential areas were constructed, starting in the eastern part near Copenhagen, and ending in the western part farthest away from Copenhagen in 1950. This led to rapid population growth; in 1900 the population reached 80,000, and in 1950 the city peaked with a population of 120,000.

Today the city consists almost entirely of 3- to 5-story residential houses, large single-family homes, and large parks; only a few small areas with light industry remain. On aerial pictures Frederiksberg stands out from the surrounding city of Copenhagen as a green area with few large roads. It is considered to be one of Copenhagen's more prestigious areas to live in. 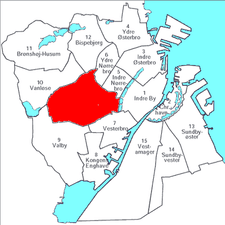 Frederiksberg, which lies west of central Copenhagen, is completely surrounded by boroughs forming part of the city of Copenhagen – the result of an expansion of the Copenhagen Municipality's boundary in 1901, which nevertheless did not include Frederiksberg in the list of municipalities to be incorporated in the enlarged area. Frederiksberg is thus effectively a municipal island within the country's capital – a unique phenomenon in present-day Europe. Other than administratively, however, it is largely indistinguishable in character from the districts of Copenhagen city which surround it.[3]

The Lycée Français Prins Henrik, a French international school, is in Frederiksberg.[9]

Population of Frederiksberg (from 1769):

The town is served by the Frederiksberg station and the Fasanvej station, opened in 2003 on the Copenhagen Metro. It serves the M1 and M2 lines and is connected with bus services. Once completed in 2017, the station will also serve M3 (the City Circle Line) providing an interchange between it and the existing Metro lines.