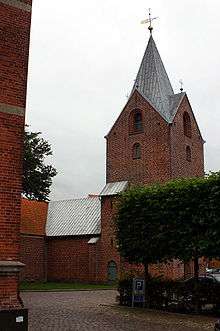 Avenue with linden in the cemetery by Ringkøbing. 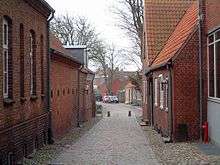 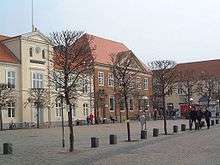 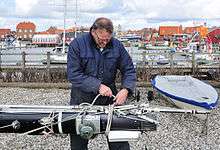 Dockworker in the harbour in Ringkøbing.

Ringkøbing is a town in Ringkøbing-Skjern municipality in Region Midtjylland on the west coast of the Jutland peninsula in west Denmark. The town has a population of 9,717 (1 January 2014).[1] 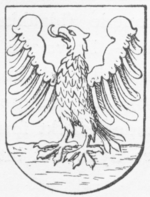 Archeological finds suggest that the town was founded in the 13th century. At that time it was the only real harbour town along the Danish west coast, being sheltered from the North Sea by the wall of Holmsland Dunes (Holmsland Klit).

In the 17th century the exit out of Ringkøbing Fjord started moving south, caused by wind and tide; Ringkøbing was then cut off from the sea. It was not until the beginning of the 20th century that a new opening to the sea was created at the town of Hvide Sande, in nearby Holmsland municipality. This enabled boats to come to Ringkøbing again from the North Sea.

The name Ringkøbing means "The market town near Rindum". Already in the 11th century, a church was built in the small village Rindum. The village is probably even older, and there has been found proof of settlements dating as far back as the 6th century.

Today the centre of Ringkøbing has some quaint old streets, most of which lead towards the water of the fjord.

Ringkøbing Church was built in the early 15th century, and its tower, which is wider on top than on the bottom, was erected ca. 1550. The church houses two organs: the oldest in the west pulpit was built by Demant & Son in 1861 with a baroque facade from 1633; the other from 1974 is by Frobenius & Sons. As the result of a restoration in 1995-1996, the church has a number of modern features, including an altarpiece by Arne Haugen Sørensen and a glass baptismal font.