The municipality, the smallest in the Brussels region by population, is dominated by the Basilica of the Sacred Heart or Koekelberg Basilica, one of the largest Roman Catholic churches in the world. 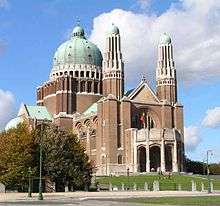