Kanagawa is located in eastern Kanagawa Prefecture, and northeast of the geographic center of the city of Yokohama.

Under the Nara period Ritsuryō system, the area that is now Kanagawa Ward became part of Tachibana District in Musashi Province. During the Edo Period, the area was tenryō territory controlled directly by the Tokugawa shogunate, but administered through various hatamoto. The area prospered in the Edo period as Kanagawa-juku, a post station on the Tōkaidō connecting Edo with Kyoto. During the Bakumatsu period, Kanagawa was the location of the signing of the Convention of Kanagawa, which ended Japan’s national isolation policy and led to the normalization of diplomatic relations between the United States and Japan. The subsequent Treaty of Amity and Commerce (United States–Japan) led to the establishment of a treaty port for foreign commerce and settlement, which was initially stipulated to be Kanagawa. However, for security reasons, the actual settlement was established at neighboring Yokohama (present day Naka Ward). The Namamugi Incident, which led to the 1863 Anglo-Satsuma War, occurred in Kanagawa.

After the Meiji Restoration, the area was transferred to the new Kanagawa Prefecture in 1868. Kanagawa was connected to Yokohama and Tokyo by train in 1872, and was proclaimed a town on April 1, 1889. On April 1, 1901 it was absorbed into neighboring Yokohama. Kanagawa suffered severe damage from the 1923 Great Kantō earthquake. On October 1, 1927 it became Kanagawa Ward within the city of Yokohama. The area again destroyed during World War II, first being bombed during the Doolittle Raid of 1942, and finally being completely devastated during the massive Yokohama air raid of May 29, 1945. Kanagawa Ward soon rebuilt after the end of the war, although large portions of its territory remained until the control of the United States military until the 1970s.

Kanagawa Ward is a regional commercial center and bedroom community for central Yokohama and Tokyo. The coastal area is part of the Keihin Industrial Zone, and is the most industrialized region within Yokohama. Major factories are operated by Nissan, JVC, Nippon Petroleum Refining Co., Ltd., Nippon Flour Mills, Showa Denko, Asahi Glass Co. Mazda has a research and development center in Kanagawa-ku.[1] 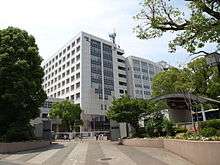