Sagamihara (相模原市, Sagamihara-shi) is a city in north-central Kanagawa Prefecture, bordering Tokyo, Japan. It is the third most populous city in the prefecture, after Yokohama and Kawasaki, and the fifth most populous suburb of Greater Tokyo. Its northern neighbor is Machida, with which a cross-prefectural merger has been proposed.[1]

On 1 April 2010, the city became the 19th city designated by government ordinance. As a result of this, three wards were established: Midori-ku, Chūō-ku and Minami-ku. 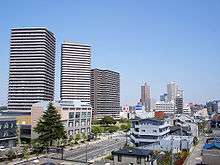 A street view in Sagamihara 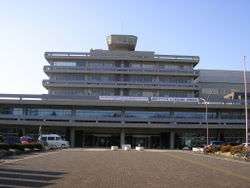 The area of modern Sagamihara has been settled since ancient times, and has a number of remains from the Japanese Paleolithic period and Kofun period have been found. It was home to the Yokoyama clan, one of the seven warrior clans of the Musashi region during the early Kamakura period. During the Edo period, the lands around Sagamihara were tenryō territory theoretically administered directly by the Tokugawa Shogunate in Edo; however, in reality, the area was a patchwork of small fiefs held by various hatamoto, as well as exclaves under the control of the Ogino-Yamanaka Domain and Karasuyama Domain.

After the Meiji Restoration, the eastern portion was part of Kōza District, and the western portion was part of Tsukui District. The Kōza District portion was administratively divided into six villages on 1 April 1889. The area was the location of extensive training facilities and arsenals of the Imperial Japanese Army during the 1930s. These villages were merged on 29 April 1941 together with neighboring Zama Town to create Sagamihara Town. At the time of its formation, it was the largest town in Japan in terms of area.

On 1 September 1948 Zama was administratively separated into Zama Town. The remaining portion became Sagamihara City on 20 November 1954. The city population had grown steadily, partly due to local industrial development, and partly due to the city's excellent transportation infrastructure connecting it to Yokohama, Tokyo and Hachiōji. It was designated a core city with increased autonomy in 2003.

On 20 March 2006, Sagamihara absorbed the towns of Tsukui and Sagamiko (both from Tsukui District). The merged city consisted of two geographically separate areas, as two other towns of Tsukui District (Fujino and Shiroyama) elected to remain separate. A further merger on 11 March 2007 joined Fujino and Shiroyama with Sagamihara, thus geographically unifying the city, and dissolving former Tsukui District. In 2007, the population of Sagamihara exceeded 700,000. In 2010, Sagamihara was redesignated as a government ordinance city and split into 3 wards Midori-ku, Chūō-ku, and Minami-ku.