Schaerbeek (obsolete Dutch spelling, retained in French, pronounced [skaʁˈbek]) or Schaarbeek (Dutch, pronounced [ˈsxaːrbeːk]) is one of the nineteen municipalities located in the Brussels-Capital Region of Belgium. The first mention of the name was Scarenbecca, recorded in a document from the Bishop of Cambrai in 1120.[2] The origin of the name may come from the Franconian (Old Dutch) words schaer (notch, score) and beek (creek).[3]

Schaerbeek is nicknamed "the city of donkeys" (la cité des ânes or de ezelsgemeente). This name is reminiscent of times when people of Schaerbeek, who were cultivators of sour cherries primarily for Kriek production, would arrive at the Brussels marketplace with donkeys laden with sour cherries. Donkeys are still kept in Josaphat Park, and sour cherry trees line the streets of the Diamant Quarter of Schaerbeek (Avenue Milcampslaan, Avenue Emile Maxlaan, and Avenue Opale/Opaallaan). The Square des Griottiers/Morelleboomsquare is named after these trees.

The eastern part of Schaerbeek (the area near Vergote Square, Diamant quarter, and Josaphat Park) is nowadays a location selected by affluent people for its architecture and its convenient location (close to the EU institutions and the financial heart of the city, the airport and highways). Young couples are also favouring this suburb for its "Notting Hill" atmosphere and the still reasonable pricing of real estate, while prices are on the surge everywhere else in Brussels.

The western part of Schaerbeek (the area near the Brussels-North railway station, the Chaussée de Haecht/Haachtsesteenweg and the Van Praet bridge) is home to a large Turkish immigrant community, a significant part of which originates from Afyon or Emirdağ, Turkey. It is also home to a large Moroccan population and other immigrant communities such as Spanish, Congolese, and Asian immigrants. The area around St. Mary's Royal Church is the part where the Turkish community gathers in Brussels, which has led the area to be dubbed "Petite Anatolie"[4] because of all the Turkish restaurants and shops at the Chaussée de Haecht/Haachtsesteenweg. However, because of the numerous schools like the Hogeschool Sint-Lukas Brussel, the administrations and the proximity of the Rue Royale there is a social mix. There are also several affluent streets and neighbourhoods in this area including the Quartier des Fleurs/Bloemenwijk, Boulevard Lambermontlaan, Place General Meiserplein, Squares Huart-Hamoir and Square Francois Riga and Avenue Eugene Demolderlaan).

The Schaerbeek Cemetery, despite its name, is actually in the neighbouring municipality of Evere.

The period at which human activity started in Schaerbeek can be inferred from the Stone-Age flint tools that were recovered in the Josaphat valley. Tombs and coins dating from the reign of Hadrian (2nd century) were also found near the old Roman roads that crossed Schaerbeek's territory.

The first mention of the town's name appears in a legal document dated 1120, whereby the bishop of Cambrai granted the administration of the churches of Scarenbecca and Everna (today's neighbouring Evere) to the canons of Soignies. Politically, the town was part of the Duchy of Brabant. In 1301, John II, Duke of Brabant, had the town administered by the schepen (aldermen) of Brussels. A new church to Saint Servatius was built around that same time, at the same location as the old church.

At the end of the 14th century, the Schaerbeek lands that belonged to the Lords of Kraainem were sold and reconverted into a hunting ground. The official entry of the visiting Dukes of Burgundy into Brussels, their second capital, was also through Schaerbeek, where they had to swear to uphold the city's privileges. The game reservation and the rural character of the village lasted until the end of the 18th century. The areas not covered by woods were used to cultivate vegetables and grow vines. In 1540, Schaerbeek counted 112 houses and 600 inhabitants. 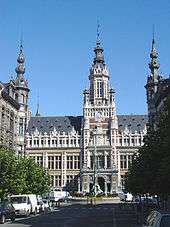 Up until then, the village had lived in relative peace. This would change in the middle of the 16th century as the Reformation set in. Schaerbeek suffered through ravages and destructions about a dozen times over the following two centuries, starting in the 1570s with William the Silent's mercenary troops fighting the Catholic Duke of Alba.

Spanish, French, British, and Bavarian troops all came through Schaerbeek, with the usual exactions and requisitions inflicted on the population.

After the French Revolution, it was decreed that Schaerbeek would be taken away from Brussels and proclaimed an independent commune, with its own mayor, schepen, and municipal assembly.

On 27 September 1830, during the Belgian Revolution, some fighting occurred in the Josaphat valley between the revolutionary troops and the retreating Dutch troops.

In 1879, a more modern Saint Servatius Church was built near the old one, which was eventually demolished in 1905. The town hall and Schaerbeek railway station were built in 1887 and 1902, respectively.

At the end of the 19th and in the early 20th centuries, Schaerbeek became home to the gentry. Avenue Louis Bertrand was laid out to herald a new, tree-filled residential district for the city's burgeoning middle classes, many of whom employed the period's best architects to design their new homes. Gustave Strauven, Franz Hemelsoet and Henri Jacobs were just three of the architects who reinvented family houses, apartment buildings and educational buildings in the Art Nouveau style.

In 1889 the shooting range known as the Tir national was established at Schaerbeek. It was there that the British nurse Edith Cavell was executed by an occupying German Army firing squad in 1915.

Dwight D. Eisenhower came to visit the city at the close of World War II. Five years later, the population of Schaerbeek peaked at 125,000 inhabitants.

Nowadays, the city is governed by a liberal-ecologist majority, after a disputed run between Bernard Clerfayt (FDF) and Laurette Onkelinx (PS).

On the morning of 22 March 2016, three coordinated bombings occurred in Belgium in which the Islamic State of Iraq and the Levant (ISIL) claimed responsibility. In these attacks, at least 31 victims and two suicide bombers were killed, and 300 other people were injured.[5] Hours after the attacks, police were pointed to a home in Schaarbeek by the taxi driver who drove the suspects to Brussels Airport.[6] They raided the home and found a nail bomb, 15 kilograms (33 lb) of acetone peroxide, hydrogen peroxide, and an ISIL flag.[7] Inside a waste container near the house they also found a computer belonging to Ibrahim El Bakraoui who is believed to have carried out suicide bombings during the attacks along with his brother.[8]

Nearly seven months later, on 5 October, three police officers were attacked by a man with a camping knife in Schaerbeek. Two of them suffered stab wounds, while the third was physically assaulted but otherwise uninjured. The assailant was then shot in the leg, subdued, and taken to hospital for medical treatment.[9] He was later charged with attempted terrorism-related murder and participating in a terrorist group.[10]

As of 2016 there the largest share of Muslims in Schaerbeek are Turkish, but there are also Albanians and Turks among the Muslims. There are as non-Muslim foreign populations such as Bulgarians, Polish, and Romanians. Mayor of Scherbeek Bernard Clerfayt argued that the diversity in the foreign population means there is a lack of a ghetto effect, and Molenbeek mayor Françoise Schepmans stated that the foreigner population in Schaerbeek was more diverse than that of Molenbeek.[11]

As of 2016 22% of young people in Schaerbeek are unemployed. The commune is in an area of Brussels called the "poor croissant".[11]

Koninklijk Atheneum Emmanuel Hiel serves as the public Dutch-language secondary school in Schaerbeek, operated by the Flemish Community of Belgium.[14] 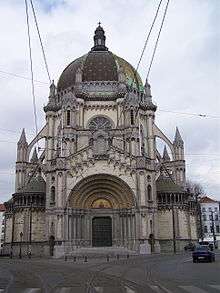