Reactions to the 2016 Brussels bombings

A number of countries, national leaders and international organisations expressed comments or lit monuments in reaction to the 2016 Brussels bombings.

Cuban president Raúl Castro and the visiting Obama family observing a minute of silence at a Baseball game.

MPs in the Chamber of Deputies in the Czech Republic holding a minute of silence for the victims of the bombings. 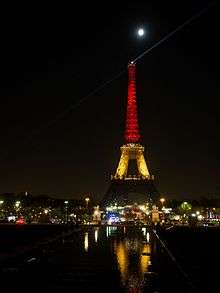 Paris' Eiffel Tower illuminated with the colours of Belgium's flag. 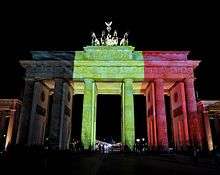 Berlin's Brandenburg Gate illuminated with the colours of Belgium's flag.

Flowers at the Belgian Embassy in Warsaw, Poland.

Hours after the attack the French-language hashtag #JeSuisBruxelles (#IamBrussels) and images of the Belgian comic character Tintin crying trended on social media sites. Also, hashtags such as #ikwilhelpen (#Iwanttohelp) and #PorteOuverte (#Opendoor) were used by Brussels residents who wanted to offer shelter and assistance for people who might need help.[142][143][144]

The Mexican Senate building illuminated with the colours of the flag of Belgium.

Following the attacks, several structures around the world were illuminated in the colours of the Belgian flag, including the Brandenburg Gate in Berlin, the Eiffel Tower in Paris, the Trevi Fountain in Rome, the National Gallery in London's Trafalgar Square, and the Burj Khalifa in Dubai.[146] New York Governor Andrew Cuomo announced that One World Trade Center, the tallest skyscraper in the Western Hemisphere, would be illuminated in the flag's colours on the night of the attacks, 22 March 2016, while the spire of the Empire State Building went dark.[147] The Toronto Sign was lit up in the colours of the Belgian flag on the night of the attacks.[148]

Governments, media outlets, and social media users received criticism in some media and academic analysis for their disproportionate emphasis placed on the attacks in Brussels over similar attacks in other countries, particularly in Turkey, which occurred days before. Similarly, reactions to the November 2015 Paris attacks were viewed as disproportionate in comparison to those of earlier bombings in Beirut.[149][150][151][152][153] According to Akin Unver, a professor of international affairs at Istanbul’s Kadir Has University, being "selective" about terrorism is counterproductive to the global counterterrorism efforts.[154]