Brussels South Charleroi Airport (BSCA), also called Charleroi Airport or Gosselies Airport, (IATA: CRL, ICAO: EBCI) is an international airport, located in Gosselies, a part of the city of Charleroi. The airport is 4 nautical miles (7.4 km; 4.6 mi) north[1] of Charleroi and 46 km (29 mi) south of central Brussels, in Wallonia (Belgium). The Aéropole, one of the Science Parks of Wallonia, is located near the airport.

The first aeronautical activities in Gosselies date back to 1919 as a flying school, then aeronautical maintenance activities the following year. The British aircraft manufacturer Fairey Aviation settled a subsidiary Avions Fairey on the site (then known as Mont des Bergers) in 1931.

Gosselies airfield became a public aerodrome after World War II, but the main activities of the site remained aeronautical constructions (installation of SABCA in 1954, then SONACA in 1978, taking the place of Fairey).

In the 1970s, the Belgian national airline Sabena launched a Liège–Charleroi–London service, but this was soon dropped because of poor results. Gosselies was left with almost no passenger traffic, the airport being mainly used for private or pleasure flights, training flights and occasional charters to leisure destinations around the Mediterranean Sea or to Algeria.

Development since the 1990s

Although criticised for the subsidies paid by the Walloon government to help its installation, Ryanair opened new routes from Brussels South Charleroi (they also closed two destinations: London–Stansted and Liverpool, although Stansted was re-introduced in June 2007 before being suspended again). Other low-cost carriers later joined Ryanair in Brussels South Charleroi, such as Wizz Air. The Polish airline Air Polonia operated services from here to Warsaw and Katowice before going bankrupt in August 2004.

In September 2006 it was announced that Moroccan low-cost airline Jet4you would launch three weekly flights to Casablanca (on Wednesday, Thursday and Sunday) starting 1 November 2006, in code-share cooperation with Belgian airline Jetairfly.

The European Commission objected to assistance the airport offered to Ryanair, since the airport is owned by the Wallonia regional government and thus the discounts and other benefits could be considered state aid.[2] However, the Court of First Instance (a European Union court) decided on 17 December 2008 that the Commission's decision finding that illegal aid had been granted to Ryanair should be annulled and quashed as being erroneous in law. However, in March 2012, the Commission reopened the case in order to take this judgement into account.[3] 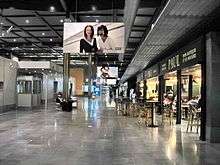 The airport is accessible by the highway from Brussels, Liège or Lille.