Etterbeek (French: [ɛtəʁˈbek]; Dutch: [ˈɛtərˌbeːk]) is one of the nineteen municipalities located in the Brussels-Capital Region of Belgium. It neighbours the municipalities of the City of Brussels, Ixelles, Auderghem, Woluwe-Saint-Pierre, Woluwe-Saint-Lambert and Schaerbeek.

The main university campus of Vrije Universiteit Brussel is called Campus Etterbeek, although it is geographically not within Etterbeek but in the adjacent municipality of Ixelles.

According to legend, Gertrude, daughter of Pippin of Landen, founded a chapel here in the 8th century. A document by Otto I, dated 966, mentions the church of Iatrebache. The name Ietrebecca – possibly from the Celtic root ett meaning "rapid movement" and the Dutch word beek meaning "stream" – is found for the first time in a document dated 1127. The current spelling appears eleven years later in 1138, around which time a newer and larger church was built.

In the Middle Ages, Etterbeek was a rural hamlet mostly independent of Brussels, aside from taxation rights on beer given to Brussels around 1300 by John II, Duke of Brabant. The following two centuries counted several grievous moments: in 1489, Albert, Duke of Saxe ravaged Etterbeek in his pursuit of the rebels who fought against Maximilian of Austria; in 1580, the village is destroyed once more, this time by the iconoclasts during the Protestant Reformation wars. Peace came back under the reigns of Archdukes Albert and Isabella.

In 1673, Etterbeek gained its independence from neighbouring Sint-Genesius-Rode, when Charles II of Spain promoted it into a barony. The first baron was Don Diego-Henriquez de Castro, general treasurer of the Netherlands armies. The Castro house was sold in 1767 and can still be seen today as Etterbeek's oldest building.

Under the French regime, Etterbeek was made into a commune, within the canton of Sint-Stevens-Woluwe. From then on, and especially after the Belgian Revolution of 1830 and the development of Brussels as a capital city, the population of Etterbeek grew quickly. In 1876, there were more than 10,000 inhabitants, in 1900 more than 20,000, and in 1910 more than 33,000. In the 1900s (decade), under the reign of Leopold II, construction boomed and changed the town's character with the addition of the broad avenues and residential areas that we know today. 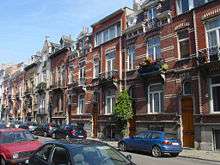 There is a rail station called Gare d'Etterbeek or Etterbeek-Station but, like the Vrije Universiteit Brussel, it is also located in Ixelles or Elsene. Presently, Etterbeek has one rail station (Mérode) and three metro stations (Mérode, Thieffry and Pétillon).

A project is currently proposed to redevelop an area of Etterbeek near the Avenue des Casernes. This project would result in the town hall and police station being relocated to new buildings in a central administrative centre on this site.[3] The new site is being called the Jardins de la Chasse (French) or Tuinen van de Jacht (Dutch). 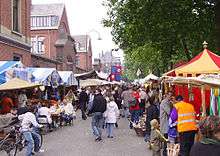 Etterbeek hosts an annual medieval market. Previously held at the end of May on the Avenue du 2ème Régiment de Lanciers in the south of the municipality, in recent years it has taken place in Cinquantenaire.

Lived part of their life in Etterbeek:

Etterbeek is twinned with: