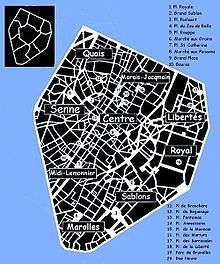 A map (in French) of the Pentagon and its neighbourhoods.

The Brussels small ring (French: petite ceinture, Dutch: kleine ring) inner ring road, formally R20 is a series of roadways in central Brussels, Belgium, surrounding the historic city centre. The city centre is usually defined as the area within the small ring; this area is called the pentagon due to its pentagonal shape. The pentagon forms the core of the City of Brussels municipality.

The road was built on the site of the 14th-century second walls of Brussels, after they had been torn down. During the second stage of the covering of the Senne in the 20th century, the river was diverted to underneath the western boulevards of the ring. This freed up the main tunnels that had contained the water to allow construction of the Brussels premetro with minimal disruption of the surface.

The small ring is about 8 km long. It is surrounded by the Greater Ring, which runs about 30 km and by the Ring (about 80 km). The road passes through tunnels allowing vehicles to avoid traffic lights that regulate the circulation at surface level. Thus, it is possible to travel from the Brussels-South railway station to the Place Sainctelette/Saincteletteplein (via Arts-Loi), and even further to the Basilica, or the reverse route, through tunnels without having to stop at traffic lights. The section of the small ring between the Place Sainctelette and the south station via the Anderlecht gate is completely at surface-level and is subsequently slower to travel along.

In the 14th century, Brussels had a second set of defensive walls built to accommodate the expanding city. There were eight gates built along its length, many of which give their names to squares and intersections along the course of the road.

The walls proved fairly useless in combat, not able to prevent either the French bombardment of Brussels in 1695, or French troops from seizing the city in 1746 as part of the War of the Austrian Succession. After the latter, the defensive works were in ruins. By that time, siege was no longer as important a part of warfare. Due to the growth of commerce and roads, it was found that the fortifications did little more than frustrate transit into and out of the city.

In 1782, Emperor Joseph II ordered the dismantling of most fortifications in the Low Countries, including those of Brussels. The dismantling work of the exterior defences began in the east of the city. In 1795, when Republican France invaded and annexed the Low Countries, the demolitions were stopped, not resuming until an order from Napoleon in 1804. Laeken Gate was destroyed in 1808. By an ordinance on May 19, 1810, the French Emperor ordered the second walls demolished and replaced by boulevards with a median in the centre. The fall of the First French Empire prevented the project's immediate execution.

With the return of stability, in 1818, authorities organized a contest for plans to demolish the ramparts and replace them with boulevards suited to the exigencies of contemporary life in the city. The proposal of Jean-Baptiste Vifquain was ultimately chosen. It involved construction of squares and boulevards, with spaces to walk and two to four rows of trees lining the route, a main road and parallel side roads. A barrier with a ditch running its length was still installed, however, and customs houses built at the entrances, to allow continued taxation of commercial goods entering the city. The work was to be financed by selling the land that was freed up, although this took over 20 years to do.

In the 1950s, with pressure from the automobile, new plans to improve traffic flow were implemented, partly due to the 1958 World's Fair. Later, tunnels were dug, and one of the main lines of the Brussels Metro now runs primarily underneath the small ring.

All ring roads in Belgium bear the name ring. Brussels has three ring roads: Ring 0 that surrounds the agglomeration, Ring 21 that is intermediate, and Ring 20, the innermost, that comprises the small ring, with an extension northwestwards from the north-west corner of the pentagon along boulevard Léopold II/Leopold II laan and avenue Charles Quint/Karel de Vijfdelaan, all the way to R0.

Roads that make up the small ring

The small ring is actually composed of a set of roads that form a pentagon, or ring.

The small ring also crosses a lot of main roads leading to other towns. Some of those crossroads are located next to former gates of the second walls of Brussels and are named after those gates, for instance Porte de Namur/Naamsepoort. On top of the 7 gates of the second walls, some of the gates were built later on to collect taxes at important crossroads, among which the Porte de Ninove/Ninoofsepoort and the Porte d'Anvers/Antwerpsepoort. The only gate to remain is the Porte de Hal/Hallepoort, while at Porte d'Anderlecht/Anderlechtsepoort and at Porte de Ninove/Ninoofsepoort some buildings from the former gate remain.

Starting from the north-east of the small ring, place Sainctelette, and going clockwise, the ring crosses successively:

The Brussels metro's lines 2 and 6 run under or alongside the small ring from the South Station to Place Sainctelette via Arts-Loi/Kunst-Wet, while the section via the Anderlecht gate is serviced by tram routes 51 from Lemonnier to Petit Château/Kleinkasteel and 82 from Lemonnier to the Ninove gate. Bus 86 follows the small ring for one stop between the Ninove and Flanders gates. Between Rogier and Botanique/Kruidtuin, bus 61 also drives on the small ring, while buses 34, 64 and 80 drive between the Namur gate and Trône/Troon.