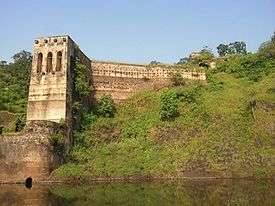 The ruined palace of the Rajas of Makrai State.

Makrai State was a princely state in India during the time of the British Raj. The seat was in Makrai.

In 1892 the state covered an area of 401 square kilometres (155 sq mi) forming an enclave surrounded by the British territory of the Nerbudda Division of the Central Provinces. Makrai State had a population of 16,784, which was reduced by famine to 13,025 by 1901. The state's rulers were of Rajput lineage and bore the title Maharaja.[1] According to tradition the ruling family originally held the taluka of Kalibhit in Hoshangabad district.

According to legend Makrai princely state was established in 1663 century by Raj Gond Raja Karkat Rai who hailed from a family that owned land in Harda tehsil. In the 18th century the Scindia and the Peshwa warriors took over the forested areas of Kalibhit and Charwa from Makrai. In December 1890 the British government took over Makrai State under the doctrine of lapse owing to bad administration. Power was restored to the native ruler in 1893 under the condition that he appoint a Diwan (Minister) duly approved by the British Head Commissioner.

After Indian independence in 1947, the rulers of Makrai acceded to the Union of India on 1 February 1948. The principality was incorporated into the state of Madhya Pradesh, which in turn was created from the territories under the former Central Provinces and Berar.

With the 26th Amendment to the Constitution of India, the Government of India abolished official recognition for all titles, classes and privy purses for heads of former princely states. However, many royal households continue succession and generally have limited social influence on their former subjects. The former Kings and Princes do not wield any legislative or jurisdictional power unless elected through general democratic representation. For Makrai, the ceremonial present ruler is Raja Sahib Ajay Kumar Shah, Raja of Makrai.