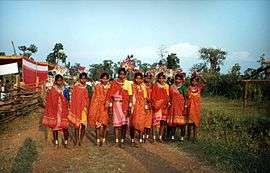 Jhabua State was one of the princely states of India during the period of the British Raj. It had its capital in Jhabua town. Most of the territory of the princely state was inhabited by the Bhil people, who constituted a majority of the population. Umarkot was a thikana or vassal state of Jhabua.[1]

Rao Bhirji, fifth son of Rao Jodha of Marwar, was the earliest known ancestor of the ruling family. The state of Jhabua was founded by his descendant, Kunwar Kesho Das or Kishan Das, in 1584. He was granted the title of Raja by Mughal Emperor Jahangir of Delhi as a reward for a successful campaign in Bengal, and for punishing the Bhil Chiefs of Jhabua, who had murdered an Imperial Viceroy of Gujarat. Its rulers were Rajputs of the Rathore dynasty.[2]

During British rule the state was under the Bhopawar Agency of the Central India Agency and in 1927 it became part of the Malwa Agency. After India's independence in 1947, Jhabua's last ruler signed the accession to the Indian Union on 15 June 1948, and Jhabua became part of the newly created Madhya Bharat state, which in 1956 was merged into Madhya Pradesh.[3]

The rulers of Jhabua were titled "Raja". They were granted a hereditary salute of 11 guns by the British.[4]