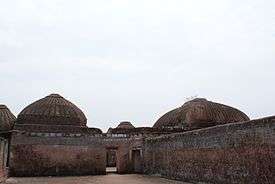 Narsinghgarh fort, the official Residence of the rulers of the state until Raja Bhanu Prakash Singhji shifted to the Bhanu Niwas Palace in the town in 1962

Narsinghgarh State[1] is a former princely state of the British Raj in India. It formed an enclave within Rajgarh State and was placed administratively under the Bhopal Agency subdivision of the Central India Agency. The state covered an area of 1920 km² and had a population of 38,052 in 1901.

The capital of state was town of the same name Narsinghgarh.[1]

The principality was founded in 1681 by a Hindu dynasty whose rulers belonged to the Kshatriya - Parmar clan of Rajputs and claimed descent from Umat, son of Raja Bhoj. The estate was earlier part of Rajgarh State, whose rulers also share same ancestry and from which it was carved as a new estate.[2] The state was a feudatory Jagir to the Holkar rulers of Indore State, but in 1872 Narsinghgarh estate recognized as a state.[3]

After Indian independence in 1947, the rulers of Narsingarh acceded to the Union of India, and the principality was incorporated into the new state of Madhya Bharat in 1948, which subsequently became Madhya Pradesh state on 1 November, 1956.

The rulers of Narsinghgarh State were styled 'Raja', and were entitled to an 11-gun salute.[4]