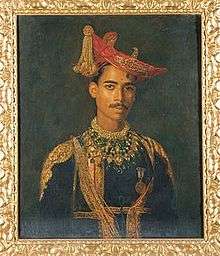 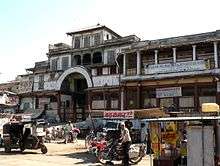 Dhar State was a Maratha princely state of India during the British Raj, part of the Central India Agency. Dhar began as one of the states during Maratha dominance in India about 1730. In 1941 it had an area of 1,798 square miles (4,660 km2) and a population of 253,210. Dhar was the capital of the state. The state was ruled by the Pawar (or Puar) dynasty of the Marathas. In 1948 it became part of Madhya Bharat.[1]

The Parmar rulers of the state claimed descent from the legendary Vikramaditya and the Paramara king Bhoja. The present Dhar dynasty was founded in 1729 by Udaji Rao Puar a distinguished Maratha general who received the territory as a grant from Peshwas. During the Pindhari raids, the state's territory was whittled away until it was restored in size in 1819 when it was taken under protection by the British. The name of the state was taken from old city of Dharlong famous as the capital of Parmar Rajputs. The state was confiscated for rebellion in 1857 but was restored in 1864 with the usual reduction in territory. 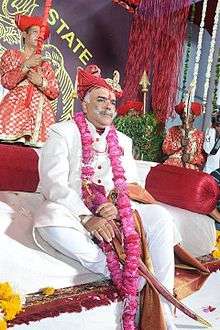 A separate department to superintend Thakurs and Bhumias, Entitled "Department of Thakurans, Bhumian and Thikanejat" was established in 1921, at which time there were 22 such estates in Dhar State.

The nobles of Dhar Holding jagir lands, all of whom paid tribute to the Darbar, were divided between Thakurs and Bhumias. The Thakurs with one exception were Rajput landholders whose estates were located in the North of the state. Locally, the Thakurs were styled Talukdars and their holdings, kothari. By caste there were 8 Rathor Rajputs, one Pawar and one Kayasth.

The Bhumias or "Alloidal" chiefs were all Bhilalas, a clan claiming mixed Bhil and Rajput (Chauhan) descent. Their grants were originally obtained from the Darbar on the understanding that they kept the peace among the Bhils and other wild hill tribes. They paid yearly tribute to the Darbar, while some received cash allowances (Bhet-Ghugri), an ancient feudal custom which has its origins in Blackmail.

1. Multhan - The estate consists of 29 villages in the Badnawar pargana.

2. Kachi Baroda The chief, Thakur Bharat Singh, who was born in 1893 and succeeded in 1901, was adopted from a Sailana family. He was a Rathor Rajput related to the Ratlam ruling family. The residence of the chief is the Town of Multhan, situated on the Ratlam river, on the Dhar road 5 miles from Badnawar and 26 miles from Dhar city. Area 99 square miles. Population was 11804 in 1931.

5. Bidwal The chief, Thakur Jaswant Singh, a Rathore of the Fatehsinghaut clan, was born in 1881, and succeeded on adoption in 1866. The estate consists of eight villages in the Badnawar pargana, yielding an annual revenue of Rs. 51000 in 1928.

In 1897 primitive stamps with entirely native text. The second definitive issue bore the name DHAR STATE in Latin script; a total of 8 stamps. Since 1901 Indian stamps have been in use.