Malabon, officially the City of Malabon (Filipino: Lungsod ng Malabon), is one of the cities and municipalities that make up Metro Manila in the Philippines. According to the 2015 census, it has a population of 365,525.[1] Located just north of Manila, it is primarily a residential and industrial town and is one of the most densely populated cities in the metropolis. It has a total land area of 15.96 square kilometers.

Malabon is part of the sub-region of Metro Manila informally called CAMANAVA, which consists of CAloocan, MAlabon, NAvotas, and VAlenzuela cities. Caloocan lies to the south and east, Navotas to the west, and Valenzuela to the north. Malabon also borders the town of Obando in the province of Bulacan to the northwest.

Malabon, per legend, came from the words maraming labong which means "plenty of labong", the edible bamboo shoots. Originally called the town of Tambobong, Malabon was founded as a “Visita” of Tondo by the Augustinian friars on May 21, 1599 and remained under the administrative jurisdiction of the province of Tondo from 1627 to 1688.

Malabon played an important economic role in the late 19th century as evidenced by the establishment of the La Princesa Tabacalera in 1851 and the Malabon Sugar Company in 1878. La Princesa was under the corporate umbrella of Compañía General de Tabacos de Filipinas which was owned by the King of Spain, while the latter pioneered the refined sugar industry in the Philippines.

The newspaper La Independencia was first printed in Malabon’s Asilo de Huérfanos, where orphaned children due to a plague in 1882 were housed.[2][3]

Malabon was officially made a municipality of the newly created province of Rizal on June 11, 1901 by virtue of Philippine Commission Act No. 137.[4] When Act No. 942 was promulgated, Malabon was merged with Navotas under a new government.[5] On January 16, 1906, Act No. 1441 separated Malabon from Navotas into two distinct municipalities of the Rizal province. The first Mayor of Malabon was Don Agustin Salamante, a spanish mestizo originally from Cavite.

Former Mayor Tito Oreta, who died in office in 2012, was credited with building some of Malabon's most important modern infrastructure projects, including the new eleven-story Malabon City Hall, the Oreta Sports Complex Building and a Government Center Annex.[6]

Malabon is one of the most densely populated cities in The Philippines and its low-lying, flat terrain makes it prone to frequent flooding, especially during high tides, heavy rains and when river and dams overflow. The four cities in CAMANAVA are commonly affected by interconnected rivers, one of which is the Tullahan River.

The river system used to be navigable and fishing was the major livelihood activity in the area. The river used to be wider, deeper, had better quality water and was a regular source of different species of fish, which were an important food source for local residents. Also, trees and crops like palay (rice) and vegetables used to be grown along the riverbanks. However, these agricultural plots have been replaced by industrial yards, which also became home to thousands of informal settlers who built makeshift dwellings without legal claim to the land.

In recent years, floods have worsened, occurring more frequently and reaching levels of several feet deep. Most affected are families in the communities that are along or near the riverbanks. The river has become narrower and shallower over the years, and its capacity to hold water has decreased. With more frequent intense rains, the riverbanks flood regularly and flooding reaches farther into low-lying and densely populated areas of the city [7] 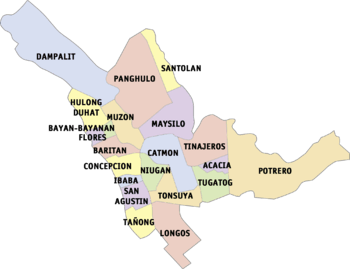 Before the present-day Malabon, the town was originally composed of sitios (barangay) and others were further divided into two or more purok (zone).

Roman Catholicism - Malabon belongs to the Roman Catholic Diocese of Kalookan. Almost 80% of the people here adhere to this religion. The seat of the Bishop of Kalookan in Malabon is in San Roque Cathedral Parish, A. Mabini St. Caloocan City. Today there are eight Roman Catholic Parishes in Malabon: San Bartolome, Sto. Rosario, Immaculate Conception, Exaltation of the Cross, San Antonio de Padua, Sacred Heart of Jesus, Immaculate Heart of Mary and Sts. Peter and John. Another parish church, Santa Clara of Assisi in Barangay Longos, is under planning stages. 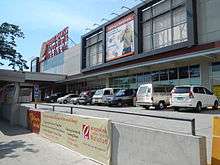 The Malabon City Tourism Office launched the Malabon Tricycle Tours in December 2014. The tours take visitors to eight heritage sites including the newly renovated 400-year-old San Bartolome Church as well as to notable heritage houses like the Raymundo House and Ibaviosa House.[9]

On March 14, 2015, the tours started to offer visitors a unique gastronomic experience through visits to the city's home-based eateries. This culinary aspect was the brainchild of current Mayor Antonlin Oreta III's wife Melissa Oreta, who is a chef by profession.[10]

On April 21, 2008, Malabon City’s newly constructed 11-storey city hall building along F. Sevilla Blvd. in Barangay San Agustin, was inaugurated by Gloria Macapagal-Arroyo on Malabon’s 7th City anniversary. It was dubbed as a “potential business center of the city,” a one-stop shop for government transactions, due to its state-of-the-art facilities such as 3 high-speed elevators and the new city hall building and its offices' “digital system.”[11][12]

The city's representative to National Sangguniang Kabataan Federation of the Philippines is Noly Miranda of Navotas, whereby the city has won the award of "Best Implementing Rule And Objection Of The Year".

The city is considered as the local Venice, due to year-long floods and gradual sinking. The City of Malabon is a place famous for its Pancit Malabon and its predominantly Atlantic ambience. It is also famous for other variety of foods(kakanin), such as puto sulot, puto bumbong, sapin-sapin, broas, bibingka and camachile. The culinary delights are abundant in its specialty eateries such as Nanay’s Pancit Malabon, Rosy’s Pancit Malabon, the Pescadores Restaurant and the Balsa sa Niugan, a floating restaurant with 350 seats. Malabon is also the home of the famous Dolor's Kakanin. It is also known for the Bulungan at Tañong Market, the "bulungan" system or whispered bidding in fish trading.[13]

Its most famous festival is the "Pagoda-Caracol", a fluvial procession with street dancing to commemorate the Feast of the Immaculate Conception every 8 December.

Aside from serving as a laboratory and research facility, an agricultural-forestryecology- tourism-integrated farm complete with recreational facilities such as horse back riding, carabao cart-pulling for passengers, fishing, camping, mini-zoo and conference area is envisioned in Salikneta.

On the other hand, Malabon National High School or MNHS is the pilot secondary school and the most populous school in the city. The school offers three curriculum: Engineering and Science Education Program (ESEP; popularly known as Special Science Class or SSC), Special Program in the Arts (SPA) and the K-to-12 Education Curriulum.