For other uses, see Morioka (disambiguation). 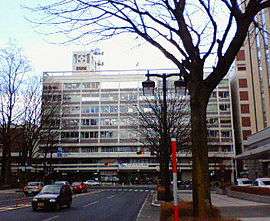 Morioka (盛岡市, Morioka-shi) is the capital city of Iwate Prefecture located in the Tōhoku region of northern Japan. As of September 2015, the city had an estimated population of 299,169 and a population density of 337 persons per km2. The total area was 886.47 square kilometres (342.27 sq mi).

The area of present-day Morioka has been continuously inhabited since the Japanese Paleolithic period. Numerous Jomon, Yayoi and Kofun period tombs and remains have been found. The Emishi inhabited the area into the Heian period. During the Enryaku era of the Heian period, Sakanoue no Tamuramaro, was ordered north to Shiwa Castle in 803 AD, as a military center to extend the domination of the Yamato dynasty over Mutsu Province. The area was later ruled by the Abe clan until their destruction during the Former Nine Years War at the hands of the Minamoto and Kiyohara clans. The Kiyohara were in turn defeated in the Gosannen War and the area came under the control of the Ōshū Fujiwara Clan based in Hiraizumi, to the south of Morioka. After the Ōshū Fujiwara were destroyed by Minamoto no Yoritomo at the start of the Kamakura period, the area was disputed by several samurai clans until the Nanbu clan, based in Sannohe to the north, expanded their territory during the Sengoku period and built Kozukata Castle in 1592.

Following the Battle of Sekigahara and the formal recognition of Morioka Domain under the Tokugawa Shogunate, Kozukata Castle was renamed Morioka Castle.[1] Its name was changed from 森岡 to 盛岡 (both read as "Morioka")[2] During the Boshin War of the Meiji restoration, Morioka Domain was a key member of the pro-Tokugawa Ōuetsu Reppan Dōmei.

After the start of the Meiji period, former Morioka Domain became Morioka Prefecture in 1870, and part of Iwate Prefecture from 1872. With the establishment of the municipality system in 1889, the city of Morioka was established and made the capital of Iwate Prefecture. The city was connected by train to Tokyo in 1890. The city emerged from World War II with very little damage, having been subject to only two minor air raids during the war.[3]

On January 10, 2006, the village of Tamayama (from Iwate District) was merged into Morioka. Morioka was proclaimed a core city in 2008, with increased local autonomy.

During the 2011 Tōhoku earthquake, Morioka was hit by a 6.1 earthquake, and numerous aftershocks, but with little damage other than extensive power outages.[4]

Morioka is located in the Kitakami Basin in central Iwate Prefecture, at the confluence of three rivers, the Kitakami, the Shizukuishi and the Nakatsu. The Kitakami River is the second largest river on the Pacific side of Japan (after the Kiso River) and the longest in the Tohoku region. It runs through the city from north to south and has a number of dams within the city boundaries, including the Shijūshida Dam and Gandō Dam. An active volcano, Mount Iwate, dominates the view to the northwest of the city. Mount Himekami is to the north and Mount Hayachine can sometimes be seen to the southeast.

Morioka has a transitional climate between the subtropical and continental climates. It is humid, wet and snowy, also a normal feature for the area. Under the Köppen classification with an August mean of 23.4 °C (74.1 °F) and January mean of −1.9 °C (28.6 °F) it falls under the subtropical classification, due to winters being milder than the −3 °C (27 °F) isotherm for continental. Temperature differences are still largely associated with moderate continental. 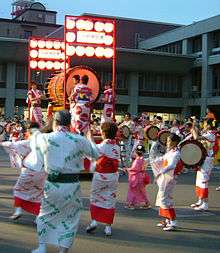 Morioka attracts tourists with local noodles such as jajamen, reimen, and wanko soba. Brewing is also a thriving industry of the city. Nambu Senbei, a type of rice cracker, is considered a local specialty.

The FIS Alpine World Ski Championships 1993 were held there.