Long, magenta peduncles on an American pokeweed, each supporting many small pedicels.

Agave with emergent peduncle. The flowers have not yet emerged from the buds. Note bracts and branches at nodes. Compare with Papyrus 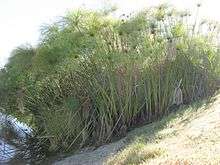 In botany, a peduncle is a stem supporting an inflorescence, or after fecundation, an infructescence.[1]

The peduncle is a stem, usually green, though some peduncles are more or less florally colored or neutral in color, having no particular pigmentation. In some species, peduncles are leafless, though others bear small leaves, or even cataphylls, at nodes; such leaves generally may be regarded as bracts. The peduncle may be ramified, in which case the ramifications are called pedicels. When an unbranched peduncle has no obvious nodes, rises directly from a bulb or stem, and especially if it rises apparently directly from the ground, it commonly is referred to as a scape.[1]

The acorns of the pedunculate oak are borne on a long peduncle, hence the name of the tree.