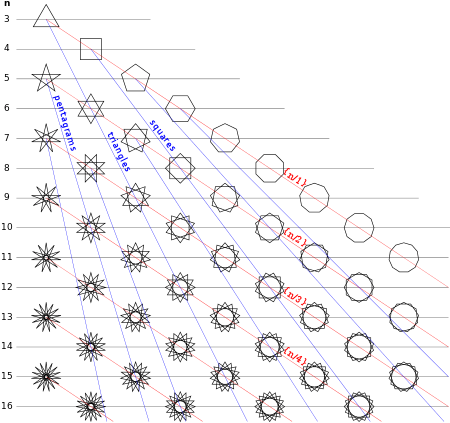 In geometry, a generalized polygon can be called a polygram, and named specifically by its number of sides, so a regular pentagram, {5/2}, has 5 sides, and the regular hexagram, {6/2} or 2{3} has 6 sides divided into two triangles.

The polygram names combine a numeral prefix, such as penta-, with the Greek suffix -gram (in this case generating the word pentagram). The prefix is normally a Greek cardinal, but synonyms using other prefixes exist. The -gram suffix derives from γραμμῆς (grammos) meaning a line.[2]

A regular polygram, as a general regular polygon, is denoted by its Schläfli symbol {p/q}, where p and q are relatively prime (they share no factors) and q ≥ 2. For integers p and q, it can be considered as being constructed by connecting every qth point out of p points regularly spaced in a circular placement.[3][4]

In other cases where n and m have a common factor, a polygram is interpreted as a lower polygon, {n/k,m/k}, with k = gcd(n,m), and rotated copies are combined as a compound polygon. These figures are called regular compound polygons.