Sriwijaya F.C. is an Indonesian football club based in Palembang, South Sumatra. The club was founded in 1976 and currently competes in the Indonesia Soccer Championship A. Sriwijaya plays their home matches in the Gelora Sriwijaya Stadium.

The club was founded in 1976 .[1] In 2002, the club moved their home base to Solo, Central Java, and changed their name to Persijatim Solo FC due to a financial crisis. But in Solo, the financial crisis was still haunting them. Luckily, in 2004, the Government of South Sumatra wanted a Palembang-based team to compete in the top division of Indonesian football. They also did not want the Gelora Sriwijaya Stadium to be abandoned, after the 2004 National Games just ended. So, they decided to buy Persijatim. The club then changed names to Sriwijaya FC and moved their home base to Palembang, South Sumatra. [2] [3] The name Sriwijaya is thought to come from the ancient Srivijaya Empire, an empire that used to rule the land in the old days. The club is owned by PT Sriwijaya Optimis Mandiri.[4] 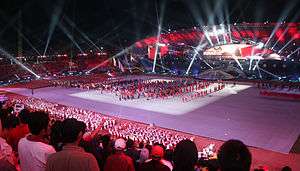 They play their home matches in Gelora Sriwijaya Stadium.[8]

The meaning of the team crest is breakdowned by several part of the crest. The first circle describes the clubs strength with unity and peace. The words Sumatera Selatan shows that its owned by South Sumatra government. Bersatu Teguh is a representation of the supporters and the clubs wholeness. The Garuda image shows power and thoughness. Behind the main logo, Mount Dempo and Ampera Bridge can be seen, both seen as South Sumatra's pride and determination.[9]

Their supporter groups are called S-Mania, Singa Mania and Sumselmania.[10]