Semen Padang F.C. is an Indonesian professional football club, based in Indarung, Padang, West Sumatra. They play in the Indonesia Soccer Championship A. The club was established on 30 November 1980.

Semen Padang Football Club is a professional football club founded at 30 November 1980 by Mr. Azwar Anas and owned by PT. Semen Padang, which is the oldest cement companies in Indonesia. This football club based in Indarung, Padang, West Sumatra and called Kabau Sirah or Red Bull. Before the creation of Liga Indonesia, as a professional club owned by a company, they competed at Galatama. Their first title was winning the Piala Galatama on 1992, by a vital goal from Delfi Adri into Arema Malang net, thus qualified them for their first appearances at Asia level, the 1993–94 Asian Cup Winners' Cup. At that competition, they fought until reach the quarter-final. 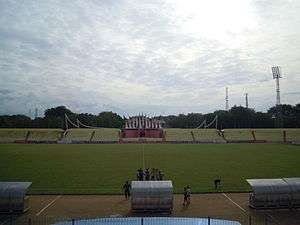 Semen Padang FC currently have a stadium, which has about 12.000 seats. This stadium was named Haji Agus Salim Stadium, an intellectual and a national hero from the local Muslim Minangkabau. The stadium also used for Rugby matches from 2009 until 2012.[1]

Semen Padang have a very tough competitor in the league, Sriwijaya, since the beginning of the Indonesia Super League. Their meeting usually called derby kalasik (classical derby). This game is also often called the Sumatra Derby. Another fierce competitor are PSMS Medan and PSPS Pekanbaru.

NOTE: Starting 2016 season, the number of foreign players allowed to be used by clubs are four players (one from Asia region).[2][3]