Tiruvallur is a suburb city of Chennai and Grade I municipality[2] in Chennai in the Indian state of Tamil Nadu. It is located on the banks of Cooum river about 42 km (26 mi) northwest of Chennai (Madras), the capital city of Tamil Nadu and located near Tiruvallur district... It is well known because of the Veera Raghavar temple which is one of the 108 sacred shrines of Vaishnavites. There is a pond nearby this temple, where the tank festival is held. There is a Siva temple near this shrine which is also quite popular among the locals. There is also a 40 feet tall Viswaroopa Panchamukha Hanuman temple, where the murti is made of a single green granite stone. Poondi reservoir from where drinking water is drawn to Chennai city is at about 9 km (5.6 mi) from this town. The neighborhood is served by Tiruvallur railway station of the Chennai Suburban Railway Network. As of 2011, the town had a population of 56,074.It is one of the fast developing suburban areas in Chennai.

The word "Tiruvallur" is supposedly derived from the Tamil sentence "tiru evvull?" meaning, "Tiru" - god (a common prefix in South India for temple towns), "evvull" - where do I sleep. So, Tiruvallur means, a place/town where, the god, Veera Raghavar asked a saint for a place to sleep for a night. A Rishi named Saalihothirar came down from Badrinath now in Uttaranchal State and settled in this place in order to reach Paramapadam (The abode Of Lord Mahavisnu). He took bath in Hiruthaapanasana Theertham and started the vow of silence (mouna viratham ) for one year. Daily he collected some rice and after a year of fasting, he purified collected rice and cooked. He offered a part of cooked rice to God (Naivedhyam) duly keeping the rest for himself to eat. He waited for some Guest, probably a muni or rishi, so that he could offer him to eat and end his fasting. At that time the God Narayana with the intention to test devotion of the Rishi came there as an old muni. He looked as if he was so hungry and thirsty. On seeing him, Saalihothirar greeted him and made him to sit and offered him a part of rice he already kept for himself. But the Guest (Lord Narayana) wanted the entire quantity of food (Rice).Saalihothirar was very happy to give all of the food to the Guest starving himself. After eating the entire food,the Lord asked where can he sleep? ( Ev-uL-uRangalAm). Saalihothirar asked him to sleep in his hut itself . In Tamil ='Ev' (எவ்)=which/'uL' (உள்)=place/room/uRangalAm(உறங்கலாம்) could sleep. Tiru (திரு) is a prefix before name of any holy place. ur ( ஊர்) means a place/village. Therefore, திரு+எவ்+உள்+ஊர் transmute as திருவள்ளூர்.

In the far past, this region was under a chain of regimes commencing from the Pallavas during the 7th century ending with the Nawab of Arcot during the early part of 19th century when it came under the British rule. In 1687, the Golkonda rulers were defeated and the region came under the Moghul emperors of Delhi. The towns and villages of this region were the scene of Carnatic wars. Battles are said to have been fought in this region during the struggle for supremacy between the English and French. The town of Pulicat was the earliest Dutch possession in India founded in 1609 which was ceded to the British in 1825. With this, the region came under the British rule which ended on 15 August 1947 with India becoming independent. 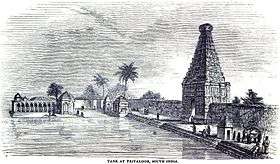 The town attained district headquarters status in 1997. Tiruvallur houses many Industries including few Fortune 100 companies. Tiruvallur is rich in industry, with some of the following industries in that region. Hindustan Motors has Lancer Car plant, Caterpillar Earth moving Equipment Plant from (9 February 2001), Hanil Lear, Delphi TVS, India Japan Lighting, Kingfisher's brewery division, Style SPA furniture, TI India, TCL etc. Mitsubishi entered India in 1998 as a part of its global expansion programme. It has a manufacturing facility in Tiruvallur near Chennai with technical collaboration with Hindustan Motors.[8]

The Chennai Metropolitan Development Authority (CMDA) has drafted a Second Master Plan that aims to develop Tiruvallur as the satellite township around the chennai city. As envisaged in the First Master Plan, development of tiruvallur as satellite town should be encouraged by provision of adequate infrastructure for housing and other developments in order to relieve congestion in the metropolis and provide better housing facilities at affordable cost.[9]

The Tamil Nadu government plans to develop a satellite township at Thirumazhisai almost 18 km from Tiruvallur, a town in Thiruvallur district, at a cost of Rs 2,160 crore would come up on 311.05 acres of land owned by the Tamil Nadu Housing Board, chief minister J Jayalalithaa said in the state Assembly.[10]

The State government will decide on the expansion of the Chennai Metropolitan Area (CMA) before the end of this fiscal, R Vaithilingam, Minister for Housing and Urban Development, told the Assembly on 25 Aug 2011. In view of the fast-paced development taking place in areas beyond the present metropolitan area jurisdiction, like Sriperumbudur, Kelambakkam, Tiruvallur and Maraimalai Nagar, it had become necessary to review the Chennai Metropolitan Planning Area that was notified in 1973-74, he said.[11]

Tiruvallur is well connected by road and rail. The Chennai International Airport lies just 42 km (26 mi) Southeast of the town which could be reached in about 45 mins by road. This lies on chennai-Bangalore broad gauge railway line and Chennai-Tirupati Trunk road. There are two major roads connecting Chennai and Tiruvallur. One route is through Patabiram, Avadi, Ambattur and Villivakkam. Another one is through Poonamallee and Koyembedu.

Since Tiruvallur is adjacent to the city of Chennai, there are remarkable number of Educational Institutions in Tiruvallur. Many professional institutions particularly the veterinary university add honour to this district in the field of education. The literacy rate is about 68% of the total population as per 2001 census (provisional). Tiruvallur has many higher secondary schools including private and government schools, government aided school called D.R.B.C.C.C is very famous around the town, and copious private schools as well serve the purpose. There are a few engineering colleges, and a few medical colleges, arts and science colleges around Tiruvallur.

Industrial Profile Agriculture is the mainstay of the economy of Thiruvallur District. As substantial portion of population are dependent on income from agriculture for livelihood, agricultural development holds the key to overall economic development of the District though the peripheral areas of the district has well developed industrial units.

The major crops cultivated are paddy, sugarcane and groundnut. The other crops includes millets like cumbu, ragi, tinai, etc., pulses like red gram, black gram, green gram, etc. gingelly and chillies. Vegetables, flowers and fruits like mango, banana, etc. are grown in the district. Three cropping seasons are being followed in the district for paddy, viz, Sornavari (April–August) Samba (July-Jan) and Navarai( Dec-March).

Apart from Agriculture the Industries, Trade and Commerce occupy a prominent position in the economy of the district. In Early 2013, It has seen a subsequent steep flourishing of Information Technology industry in which it was turned out to be the out break of IT industry in the rural area of the town. The first ever software firm which is established in 2014 is KFIN Solutions [12] which was a new dawn for the town. Followed by Orange solutions an Information Technology Enabled Service(ITES) company in 2014