Side views of a bevel (above) and a chamfer (below)

A bevelled edge (UK) or beveled edge (US) refers to an edge of a structure that is not perpendicular to the faces of the piece. The words bevel and chamfer overlap in usage; in general usage they are often interchanged, while in technical usage they may sometimes be differentiated as shown in the image at right. A bevel is typically used to soften the edge of a piece for the sake of safety, wear resistance, or aesthetics; or to facilitate mating with another piece.

Most cutting tools have a bevelled edge which is apparent when one examines the grind.

Bevel angles can be duplicated using a sliding T bevel. 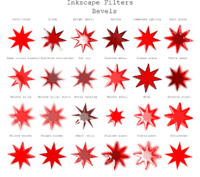 Typographic bevels are shading and artificial shadows that emulate the appearance of a 3-dimensional letter. The bevel is a relatively common effect in graphic editors such as Photoshop. As such, it is in widespread use in mainstream logos and other design elements.

Bevelled edges are a common aesthetic nicety added to window panes and mirrors.

Geologists refer to any slope of land into a stratum of different elevation as a bevel.[1]

In waterskiing, a bevel is the transition area between the side of the ski and the bottom of the ski. Beginners tend to prefer sharp bevels, which allow the ski to glide on the water surface.[2]

With a deck of cards, you can slide the top portion back so that the back of the deck is at an angle. This can be used in card tricks.

In the semiconductor industry, wafers have two typical edge types: a slanted beveled shape or a rounded bullet shape. The edges on the beveled types are called the bevel region, and they are typically ground at a 22 degree angle.[3]

Beveling and chamfering (along with other profiles) are applied to thicker pieces of metal prior to welding, see Welding_joint#V-joints. The bevel provides a smooth clean edge to the plate or pipe and allows a Weld of the correct shape (to prevent center-line cracking) to join the separate pieces of metal.

Simple Bevels can be used with a Backup Strip (thin removable sheet behind the plate joint) with chamfers (and a small Land) being used on Open Root welds. Particularly thick plate will have a "J" shaped chamfer or "U" shaped groove to reduce the amount of welding Filler metal used.

Correct joint preparation is the first step in producing a quality weld with the correct profile and reinforcement. Greater welding skill and thinner metal can reduce the exactness of the edge preparation necessary. Beveling is almost never done with Fillet Welds (weld in a corner) but as you can see from the 'Crucifix Weld' shown above that for thicker plate a double-Bevel permits full penetration of each weld to the other (removing a possible void space in the center) eliminating any source of failure (IF the Weld is made correctly).