Tochōmae Station is served by the Toei Ōedo Line, and is numbered "E-28".

The station consists of two island platforms on the 3rd basement ("3BF") level, serving four tracks. There are seven exits from the station, numbered A1 to A7. 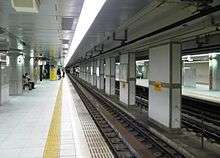 Track diagram of the station. "H" is for Hikarigaoka, "I" is for Iidabashi, and "R" is for Roppongi.