This station is served by the JR East Chūō-Sōbu Line and Toei Ōedo Line. The station number for the Ōedo Line is E-31. 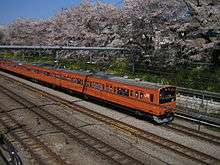 A Chuo Line Rapid 201 series train passes cherry trees alongside the tracks near the station, April 2009