The JR East station consists of two ground-level side platforms on either side of an island platform, serving four tracks in total. 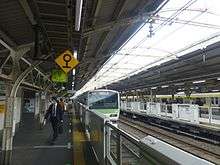 Chest-high platform edge doors were installed on the Yamanote Line platforms in September 2015, and brought into use from October.[1]

The station first opened on 23 October 1906 by a private company as a station on the Chūō Main Line, but was nationalized only a week later when the Japanese National Railways (JNR) took over the company and all of its assessments. The underground Toei Ōedo Line station opened on 20 April 2000.[2]