There is no direct connection between the platforms, so transfers require surfacing and re-entering. It is easier to change at Korakuen. 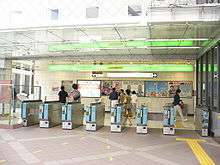