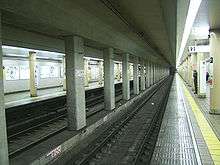 Platforms and tracks on Asakusa Line, 2006 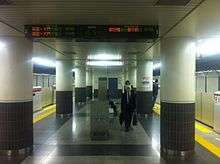 Kuramae Station (蔵前駅, Kuramae-eki) is a subway station on the Toei Asakusa Line and Toei Ōedo Line, both operated by the Tokyo Metropolitan Bureau of Transportation (Toei). It is located in the Kuramae and Kotobuki neighborhoods of Taitō, Tokyo, Japan. Its number on the Asakusa Line is A-17, and that on the Ōedo Line is E-11. The stations on the two lines do not have an underground connection; still, passengers may transfer between them.

On the Asakusa Line, Kuramae has two platforms with the two tracks between them. Track 1 is for passengers bound for Nihombashi and Nishi-Magome Stations. Track 2 is for those traveling in the opposite direction toward the terminal of the Asakusa subway line at Oshiage Station.

On the Oedo Line, an island platform stands between the two tracks. Track 1 serves passengers bound for Iidabashi and Tochōmae Stations, while Track 2 carries trains toward Ryōgoku and Daimon Stations.

The station serves the Kuramae and Kotobuki neighborhoods. Nearby are the Kuramae Water Treatment Center (on the site of the old Kuramae sumo stadium, which the station served until the stadium closed), the Sumida River, National Route 6, offices of the Waterworks and Bureau of Sewerage, the Torigoe Shrine.

This article incorporates material from the article 蔵前駅 (Kuramae-eki) in the Japanese Wikipedia, retrieved on December 16, 2007