The station is served by the JR East Chūō-Sōbu Line and the Toei Oedo Line, for which it is numbered as station E-12.

Ryōgoku is a local stop on the Chūō-Sōbu Line. "Rapid" trains bypass the station through a tunnel whose portal is to the north of the main station complex. The Chūō-Sōbu Line services use an island platform serving two tracks, with platform 1 used for westbound trains to central Tokyo and beyond, and platform 2 for eastbound trains to Chiba. As a remnant of its former terminal days, there is also a third platform (platform 3) at a slightly lower level used for special services only and not used by regular services. 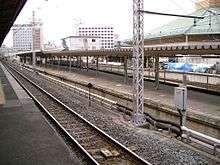 The Toei subway station lies on a north-south axis underneath Kiyosumi Street (清澄通り, Kiyosumi-dori) and has five exits, labelled A1-A5.

Ryōgoku station is located at the southern end of the Yokoami neighbourhood and directly bordering on the Ryōgoku neighbourhood. The station is close to sites such as the Ryōgoku Kokugikan sumo stadium, the Edo-Tokyo Museum, and the memorial to the victims of the Great Kantō earthquake.

Other landmarks in the surrounding area include: