Nerima Station is served by the Seibu Ikebukuro Line, Seibu Yurakucho Line, and Seibu Toshima Line, and also by the Toei Oedo Line subway. It is located 6.0 km from the terminus of the Ikebukuro Line at Ikebukuro.[1] 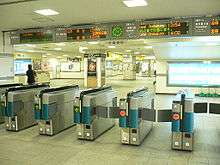 Nerima is an elevated station with two island platforms serving four tracks, with an additional outer track on either side used by passing trains.[2] Elevators and escalators connect the platforms to the ticket entrances, and the station contains a waiting room as well. 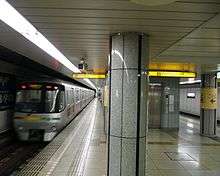 The original ground-level station was rebuilt as an elevated station in 1997, and at the same time, the number of tracks was increased to six to allow non-stop trains to pass.[2]

From 1998, inter-running of some services commenced to and from the Seibu Yurakucho Line.[2]

Station numbering was introduced on all Seibu Railway lines during fiscal 2012, with Nerima Station becoming "SI06".[3]

Through-running to and from Yokohama and Motomachi-Chukagai via the Tokyu Toyoko Line and Minatomirai Line commenced on 16 March 2013.[4]

The station and other parts of the Toei Ōedo Line are referenced in the Digimon Adventure franchise.[9][10][11]