Hikarigaoka Station is the terminus of the Toei Ōedo Line. It is numbered E-38.[1] 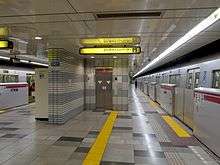 The station is the westernmost of all Toei stations, and, at a depth of 11.9 m below ground level, the platform is the closest to the surface of all the Ōedo Line stations.[1] There are five exits from the station, labelled A1 through to A5.[2]

The station has an island platform with two tracks.

The station is located towards the centre of the Hikarigaoka housing complex and is located in the vicinity of the large Hikarigaoka IMA shopping centre.[27] Hikarigaoka itself is located at the northern point of Nerima, Tokyo near the border with Itabashi, Tokyo and Wakō, Saitama. Bus services from this station are operated by Kokusaikōgyō Bus and Seibu Bus.[1] A spur of National Route 443 is routed above the station.[28]

The station and other parts of the Toei Ōedo Line are referenced in the Digimon Adventure franchise.[29][30][31]