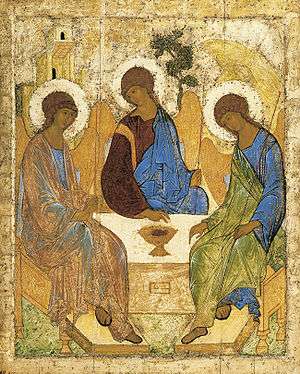 The Trisagion (Greek: Τρισάγιον "Thrice Holy"), sometimes called by its opening line Agios O Theos, is a standard hymn of the Divine Liturgy in most of the Eastern Orthodox, Oriental Orthodox and Eastern Catholic churches. The Latin name Tersanctus or Ter Sanctus is sometimes used to refer to this hymn, although this name is also sometimes used to refer to the Sanctus; it is the latter, a different formula, which is used in Western Christianity in the Mass.[1]

In churches which use the Byzantine Rite, the Trisagion is chanted immediately before the Prokeimenon and the Epistle reading. It is also included in a set of prayers named for it, called the Trisagion Prayers, which forms part of numerous services (the Hours, Vespers, Matins, and as part of the opening prayers for most services).

It is popular also in the Latin Church, where it is a part of the supplication, the chaplet of divine mercy and other prayers.

Form of the prayer

For other languages, please see the section below

The Trisagion prayer is an ancient prayer in Christianity. It may be that the prayer was originally an expansion of the angelic cry recorded in Isaiah ch 6, v 3 (sometimes called the Sanctus) or the one at Revelation 4:8

Holy God, Holy Strong, Holy Immortal, have mercy on us.[2]

Holy God, Holy Mighty One, Holy Immortal One, have mercy on us. 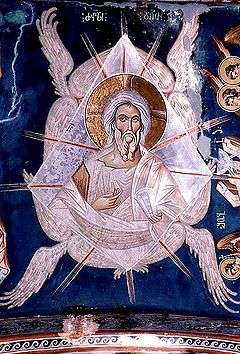 An Icon of Christ the Ancient of Days fresco Ubisi, Georgia

The hymn is of great antiquity, and perhaps much older than the event assigned by the Greek Menology as connected to its origin. The tradition recounts that during the reign of Theodosius II (408-450), Constantinople was shaken by a violent earthquake, 24 September, and that whilst the people, the emperor and the Patriarch Proclus of Constantinople (434-446) were praying for heavenly assistance, a child was suddenly lifted into midair, to whom all cried out Kyrie eleison ('Lord, have mercy'). The child was then seen to descend again to the earth, and in a loud voice he exhorted the people to pray : 'Holy God, Holy Mighty, Holy Immortal'. After giving this exhortation, the child died.

The hymn was one of the exclamations of the fathers at the Council of Chalcedon (451), and is common not only to all the Greek Oriental liturgies, but was used also in the Gallican Liturgy (see Saint Germain of Paris, d. 576), which shows that the hymn is ancient. Some believe it is extremely ancient perhaps of apostolic-era origin. However this goes against the Tradition in regards to the hymn.

The Coptic Orthodox Church believes that the Trisagion originated from Nicodemus. While taking the body of Christ off the cross with Joseph of Arimathea, Nicodemus saw Jesus Christ's eyes open and then shouted "Holy God, Holy Mighty, Holy Immortal". Traditionally, it is also considered proof that his Divinity did not part from his humanity.

Interestingly, the Gallican Liturgy refers to it as being sung both in Greek and in Latin: Incipiente præsule ecclesia Ajus [that is, Agios] psallit, dicens latinum cum græco, as also previously in Greek alone, before the Prophetia. Benedict XIV thought that the Greek formula was joined with the Latin in allusion to the divine voice heard at Constantinople. But the explanation seems hardly necessary, in view of the retention of Kyrie eleison in the Roman Liturgy, as well as such Hebrew words as Amen, Alleluia, Hosanna, Sabaoth. It is true that the Kyrie eleison is not joined to a Latin version; on the other hand, it is so simple and occurs so frequently, that its meaning could easily be learned and remembered—whereas the entire Trisagion might well receive a parallel version into Latin.

Various additions or modifications made to the Trisagion at certain points in history have been the subject of considerable controversy. According to Pseudo-Zacharias Rhetor, the phrase 'who wast crucified for us' was added to it by Eustathius of Antioch to combat the Arians, although this is dismissed by some scholars.[3] It was more likely written during the time of Peter the Fuller who enforced its use as a sort of "test of orthodoxy against Nestorianism".[4] Those who understood the hymn as being addressed to the trinity (such as John of Damascus[5]), censured Peter for propagating the teaching of the Theopaschites. Emperor Anastasius I's attempt to adopt the addition in 512 at Constantinople resulted in a riot.[6]

Whether the Trisagion is to be understood as addressed to the Holy Trinity or addressed to God the Son has been a matter of contention, particularly between those who approved of the council of Chalcedon and those who were against it. But in light of widespread adoption of the hymn with the above addition ('who wast crucified for us'), Calandion, Bishop of Antioch, sought to allay the controversy surrounding it by prefixing the words 'Christ, King'. This had the effect of making the hymn refer directly to the incarnate Word: Holy God, Holy and Strong, Holy and Immortal, Christ, King, who was crucified for us, have mercy on us. Though perhaps well intended, this effort at emendation was ultimately rejected.

Later Severus, who was the Non-Chalcedonian Patriarch of Antioch, wrote to prove the correct ascription of the hymn to the Son of God, and made the use of the emended version standard in his diocese. It is this form Holy art thou, O God, Holy art thou, O Strong One, Holy art thou, O Immortal, crucified for us, have mercy on us that is in use in the Oriental Orthodox Churches.

The eighty-first canon of the Council of Trullo anathematized anyone who allows the Trisagion to be modified by adding "who was crucified for us" or any other modification.[7]

In the eleventh century, Pope Gregory VII (1073–1085) wrote to the Armenians, who still used the emended formula, instructing them to avoid all occasion for scandal by removing the additions, which Pope Gregory argues (incorrectly) that neither the Roman nor any Eastern Church (save the Armenians themselves) had adopted. The injunction appears to have been ignored. When, centuries later, Roman Catholic union with the Armenians was again discussed, a question was addressed (30 January 1635) to the Congregatio de Propaganda Fide, as to whether the Armenian Catholics might still use the formula 'who suffered for us'. The request was answered in the negative. Nevertheless, Armenian Catholic continue to use the traditional formula.

Variations of the traditional formula and Trinitarian ascription are found also in the Armenian Orthodox Liturgy. In these the hymn is addressed to the Redeemer, and versions vary with the feast or office. Thus, the formula of Peter the Fuller (above) is used on all Fridays; on all Sundays: 'risen from the dead'; on Holy Thursday: 'betrayed for us'; on Holy Saturday: 'buried for us'; on the Feast of the Dormition of the Theotokos: 'who came to the death of the Holy Mother and Virgin'; on the feasts of the Holy Cross: 'who was crucified for us'; for the celebration of marriages: 'who took flesh for us', etc.

The Coptic Orthodox, Syriac Orthodox, Malankara Orthodox and other Oriental Orthodox Churches also use the formula 'crucified for us', with minor seasonal variations from the Armenian use.

In the Divine Liturgy

When the Trisagion is sung during the Divine Liturgy of the Byzantine Rite, before the Prokeimenon of the Gospel that precedes the Epistle reading, it is normally sung three times to one of many melodies composed for it. This is followed by singing Glory... Now..., the second half of the Trisagion once, and finally the whole Trisagion a fourth time:

On the other hand, in the usage of the other, non-Byzantine Eastern Churches, the Trisagion is simply sung thrice, with no Glory... Now....

In the East Syrian Rite, used by the Assyrian Church of the East and Syro-Malabar Catholic Church, the Trisagion is sung towards the beginning of the Holy Qurbana, before the Old Testament Readings.

In the West Syrian Rite, used by the Syriac Orthodox Church, Malankara Orthodox Syrian Church, the Syriac Catholic Church, Syro-Malankara Catholic Church and in a hybrid form, the Maronite Church and other derived rites of Syriac Christianity, the Trisagion is sung towards the beginning of the Holy Qurbana (Divine Liturgy), after the Old Testament Readings and the Introductory Hymn.

In the Armenian Rite, used by the Armenian Orthodox Church and the Armenian Catholic Church, the Trisagion occurs early in the Divine Liturgy, coming after the troparion of the Monogenes(Only-begotten Son) and the Midday first Antiphon.

As part of the Trisagion Prayers

During most services of the Eastern Orthodox Church, the Trisagion is combined with several other prayers to form a unit, often called simply the Trisagion Prayers. This set of prayers forms part of the opening prayers of most services, and is also located within many of the Hours and daily cycle of services.

While it is possible that the Trisagion has origins in the Biblical 'thrice holy' of Isaiah 6:3 (the Sanctus: Holy, holy, holy, Lord of Sabaoth. Heaven and earth are full of your glory', etc.), they are today separate prayers. The latter is used at a different point in the Liturgy (in the Divine Liturgy, during the anaphora).

In the Latin liturgy

In the Latin Church, the main regular use of the Trisagion is on Good Friday, when it is sung throughout the ceremony of the Adoration of the Cross. In the Sistine Chapel, the traditional setting was the polyphonic musical setting of Palestrina. During this service, the hymn is sung by two choirs, alternately in Greek and Latin, originally two antiphonal Greek and Latin choirs, as follows:

The hymn is sung in this manner thrice, responding to the first three of twelve reproaches.

In the Latin Church, the Trisagion is also employed in the Chaplet of Divine Mercy and the Little Office of the Blessed Virgin. There is also a Chaplet to the Holy Trinity used by the Order of the Most Holy Trinity called 'The Trisagion' or the 'Angelic Trisagion', which makes use of both forms of the Trisagion. It is also used in the hour of Prime, in the ferial Preces, on ferias of Advent and Lent and on common Vigils.

In the Roman Catholic church, an indulgence of 100 days was once associated with the Trisagion when prayed once a day together with the Sanctus, with a contrite heart to adore the Holy Trinity.[10]

In the American Book of Common Prayer

The Episcopal Church's 1979 Book of Common Prayer introduced the Trisagion into the Eucharist in both Rite One and Rite Two as part of the Word of God. In Rite One it follows the Summary of the Law. In Rite Two it can be used as an alternative to the Kyrie eleison, which follows the Collect for Purity and precedes the Collect of the Day.

In the Church of England's Common Worship

The Trisagion is used principally as a concluding prayer of the Litany in the following form:

It is also used in the Good Friday liturgy in the same way as in the Roman Catholic Church.