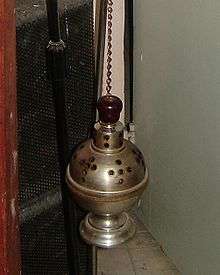 A single chain thurible, as used by some Western churches. 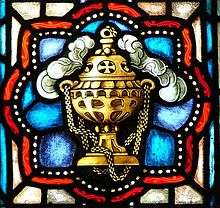 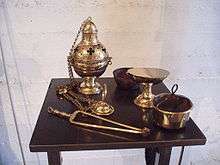 A thurible is a metal censer suspended from chains, in which incense is burned during worship services. It is used in Christian churches including the Roman Catholic, Eastern Orthodox, Armenian Apostolic and Oriental Orthodox, as well as in some Lutheran, Old Catholic, United Methodist, and Anglican churches (with its use almost universal amongst Anglo Catholic Anglican churches). In Roman Catholic, Lutheran, and Anglican churches, the altar server who carries the thurible is called the thurifer. The practice is rooted in the earlier traditions of Judaism in the time of the Second Jewish Temple.[1]

Beyond its ecclesiastical use, the thurible is also employed in various other spiritual or ceremonial traditions, including some Gnostic Churches, Freemasonry[2] (especially in the consecration of new lodges), and in Co-Freemasonry. Thuribles are sometimes employed in the practice of ceremonial magic.[3][4]

The workings of a thurible are quite simple. Each thurible consists of a censer section, chains (typically three or four, although single-chain thuribles also exist), a metal ring around the chains (used to lock the lid of the censer section in place), and usually (although not always) a removable metal crucible in which the burning charcoals are placed. Many thuribles are supplied with a stand, allowing the thurible to be hung safely when still hot, but not in use. Burning charcoal is placed inside the metal censer, either directly into the bowl section, or into a removable crucible if supplied, and incense (of which there are many different varieties) is placed upon the charcoal, where it melts to produce a sweet smelling smoke. This may be done several times during the service as the incense burns quite quickly. Once the incense has been placed on the charcoal the thurible is then closed and used for censing.[1]

A famous thurible is the huge Botafumeiro in Santiago de Compostela Cathedral, Spain[1]

Due to the ceremonial use of incense, its cultural importance in western catholicism can be seen e.g. in the introduction of a incense smelling fragrance "Avignon" in 2002.[5] [6] Avignon was created for Comme des Garçons as a part of their incense series by Bertrand Duchaufour. Thus the introduction of incense in christian worship here and there within various denominations is paralleled by wider cultural interest turning again back from the oriental mysticism also to western use of incense.

The Roman Missal, as revised in 1969, allows the use of incense at any Mass: in the entrance procession; at the beginning of Mass to incense the cross and the altar; at the Gospel procession and proclamation; after the bread and the chalice have been placed upon the altar, to incense the offerings, the cross, and the altar, as well as the priest and the people; at the elevation of the host and the chalice after the consecration.[7]

The number of swings of the thurible to be used when incensing persons or objects is specified in the General Instruction of the Roman Missal:

The responsibilities of a thurifer include:

Another server, previously called a boat boy and now more commonly a boat bearer,[1] may carry a boat or container of incense to add as the thurible burns low.

These rules, except for the manner of incensing the offerings at Mass, applied also before 1969. Earlier editions of the Roman Missal prescribe that the offerings be incensed by forming over them with the thurible first three crosses and then three circles, the first two anticlockwise and last clockwise, while also saying a prescribed prayer.[9] They also direct that incensing of the altar be done with single swings at 29 designated points of an altar attached to the rear wall of the sanctuary, and at 22 points of a freestanding altar.[1]

Pre-1969 editions of the Roman Missal did not allow the use of incense at Low Mass.

In accordance with the conditions laid down in the document Summorum Pontificum of 2007, use of the 1962 edition as an extraordinary form of the Roman Rite is permitted. Other extraordinary forms such as that employed by the Congregation of Mary Immaculate Queen, who call the 1962 version "mutilated and deformed",[10] are not authorized.

In the Ambrosian Rite the thurible has no top cover, and is swung clockwise before the censing of a person or object.[11] 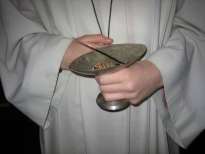 In the Anglican Communion, the use of incense is a fairly reliable guide to how 'high' (more Catholic in liturgical style) or how 'low' (more Protestant) a church is. Anglo-Catholic churches may use generous quantities of incense. In recent years, some middle-of-the-road Anglican churches have taken to using incense a few times a year for special occasions.

Traditionally, at High Mass, the following rule is observed when censing, which differs from the common Roman Rite:

In Anglo-Catholic churches, the Thurible is carried in procession in front of the Crucifer and Acolytes. The Celebrant then censes the altar on which the Eucharist is to be offered, in the following form (at a Nave Altar):

This same pattern is followed when censing the altar at the offertory, with the following prequel:

At the Gospel, the deacon (or whoever is reading the Gospel) censes following the introduction to the Gospel (i.e.: Hear the Gospel of our Lord Jesus Christ according to N... then cense) using three sets of double swings, one set South, one set North, and one set West.

At the elevations of the Blessed Sacrament, during the prayer of consecration, either the deacon, sub-deacon, or other appropriate person (including the thurifer), makes three sets of triple swings, as the parish bell and sanctuary bells are rung.

Should the Regina Coeli (during Easter) or the Angelus be said or sung, then the celebrant or other appropriate person may cense the statue of the Blessed Virgin Mary in the following form:

Incense can be used at any celebration of the Eucharist throughout the year, but especially in the seasons of Christmas, Epiphany and Easter, Maundy Thursday vigil, Palm Sunday, on the feasts of Pentecost, Trinity Sunday, Ascension, Feasts of saints and martyrs, Corpus Christi, and at the Dedication Festival or Patronal Festival of a church.

Orthodox priest and deacon making the Entrance with the censer at Great Vespers. 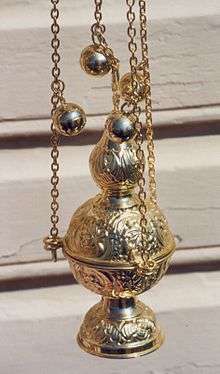 An Eastern Orthodox censer, gold with four chains and bells.

The Eastern Orthodox Church and the Byzantine Rite Eastern Catholic Churches make frequent use of incense, not only at the Divine Liturgy [1] (Eucharist), but also at Vespers, Matins and a number of other occasional services (see Euchologion). During funeral services and memorial services (Panikhida), the censer is swung almost continuously.

Incense is understood as symbolizing the sanctifying grace of the Holy Spirit and the prayers of the Saints rising to heaven. Incense is offered by the priest or deacon during the services. In some traditions, the ecclesiarch (sacristan) and his assistant (paraecclesiarch) will perform the censing at specific moments of the service.

The thurible (Greek: Θυμιατο, Thymiato; Church Slavonic: Кадилница, kadilnitsa) used is often gold plated (combining in itself at the offering of incense the three gifts of the Biblical Magi: gold, frankincense, and myrrh). The thurible consists of a metal bowl (usually with a base so it can stand upright) into which the charcoal and incense are placed, and a lid (often topped with a cross), pierced by holes to allow the fragrance from the incense to escape. The censer will usually have three outer chains (for the Holy Trinity) attached to the bowl, and a fourth inner chain (for the Oneness of God) attached to the lid. The three outer chains are gathered together and attached to a round conical plate attached to a ring; the inner chain passes through a hole in the conical plate and is attached to another ring to make it easier to lift the lid. In the Greek and some Russian practice twelve bells will be attached to the chains (their ringing symbolizes the teaching of the twelve Apostles).[1] Sometimes the bowl and lid of the thurible are decorated with crosses or icons in repousse, and may even be decorated with semi-precious stones. When not in use the thurible is usually hung from a hook in the sanctuary.

When censing, the priest or deacon holds the censer below the conical plate with only one hand (the right hand) allowing it to swing freely. He will make the Sign of the Cross with the censer by making two vertical swings and a third horizontal swing (the three swings together symbolizing the Holy Trinity).

When the temple (church building) is censed, the priest or deacon will move in a sunwise (clockwise) direction, moving to his right as he censes in order the Holy Table (altar), sanctuary, Iconostasis, walls of the temple, clergy and faithful. There are two types of censing: a Greater Censing (which encompasses the entire temple and all of the people therein), and a Lesser Censing (which, depending upon the liturgical context, consists of censing only a portion of the temple and the people).

During some censings, especially the Greater Censing, the clergyman who is performing the censing will often carry a candle in his left hand. During Bright Week (the week which begins on Easter Sunday) the priest and the deacon will carry special Paschal candles at every censing, even the Lesser Censing. While carrying the Paschal candles, the priest or deacon will greet the members of the congregation with the Paschal greeting while censing them. Simple tapers are carried while censing during funerals and memorial services.

During the Eastern Roman Empire (Byzantine Empire) the emperor used to be permitted to offer incense on the Feast of the Nativity (no doubt as a memorial of the gifts of the Magi), but was permitted to perform no other priestly function.

If no priest is available, incense may be offered by a reader or senior layman, but with a hand censer which has no chains on it, but rather a handle (it often has bells as well, suspended from the handle or around the rim). The hand censer is also used in some monasteries even when a priest is present for certain censings which are done by a monastic other than a vested priest or deacon.

During Holy Week it is customary in some places for even the priest and deacon to use the hand censer for all of the censings, as a sign of humility and mourning at the Passion of Christ.

The boat boy or boat bearer is a junior altar server position found in Catholic and Anglican Churches. The role of a boat boy is to assist the thurifer, the senior altar server who carries the thurible.[1] The boat bearer carries the boat, a small metal container, Latin navicula, which holds the supplies of incense. The boat has a small spoon inside which is used to transfer the grains of incense onto the red-hot charcoals in the thurible. Although at times the boat bearer transfers the incense himself, more usually he simply holds the boat open as the priest performs this task.