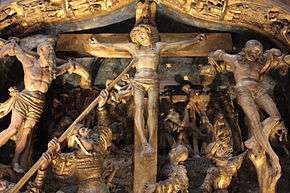 Troyes (French pronunciation: ​[tʁwa]) is a commune and the capital of the department of Aube in north-central France. It is located on the Seine river about 150 km (93 mi) southeast of Paris. This area is known as the Champagne region of Northern France. Many half-timbered houses (mainly of the 16th century) survive in the old town. Troyes has been in existence since the Roman era, as Augustobona Tricassium, which stood at the hub of numerous highways, primarily the Via Agrippa.

For the ecclesiastical history, see bishopric of Troyes

Troyes has been in existence since the Roman era, as Augustobona Tricassium, which stood at the hub of numerous highways, primarily the Via Agrippa which led north to Reims and south to Langres and eventually to Milan;[1] other Roman routes from Troyes led to Poitiers, Autun and Orléans.[2] It was the civitas of the Tricasses,[3] who had been separated by Augustus from the Senones. Of the Gallo-Roman city of the early Empire, some scattered remains have been found, but no public monuments, other than traces of an aqueduct. By the Late Empire the settlement was reduced in extent, and referred to as Tricassium or Tricassae, the origin of French Troyes.

The city was the seat of a bishop from the fourth century – the legend of its bishop Lupus (Loup), who saved the city from Attila by offering himself as hostage is hagiographic rather than historical[4] – though it was several centuries before it gained importance as a medieval centre of commerce.

In the early cathedral on the present site, Louis the Stammerer in 878 received at Troyes the imperial crown from the hands of Pope John VIII. At the end of the ninth century, following depredations to the city by Normans, the counts of Champagne chose Troyes as their capital; it remained the capital of the Province of Champagne until the Revolution. The Abbey of Saint-Loup developed a renowned library and scriptorium. During the Middle Ages, it was an important trading town, and gave its name to troy weight. The Champagne cloth fairs and the revival of long-distance trade and new extension of coinage and credit were the real engines that drove the medieval economy of Troyes.

In 1285, when Philip the Fair united Champagne to the royal domain, the town kept a number of its traditional privileges. John the Fearless, Duke of Burgundy and ally of the English, aimed in 1417 at making Troyes the capital of France, and he came to an understanding with Isabeau of Bavaria, wife of Charles VI of France, that a court, council, and parlement with comptroller's offices should be established at Troyes. It was at Troyes, then in the hands of the Burgundians, that on 21 May 1420, the Treaty of Troyes was signed by which Henry V of England was betrothed to Catherine, daughter of Charles VI, and by terms of which he was to succeed Charles, to the detriment of the Dauphin. The high-water mark of Plantagenet hegemony in France was reversed when the Dauphin, afterwards Charles VII, and Joan of Arc recovered the town of Troyes in 1429.

In medieval times Troyes was an important international trade centre, centring on the Troyes Fair. The name troy weight for gold derives from the standard of measurement evolving here.[5] 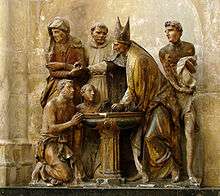 The great fire of 1524 destroyed much of the medieval city, in spite of the city's numerous canals. 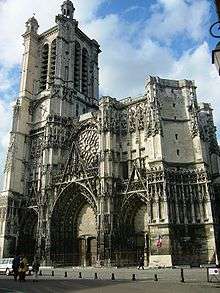 Not having suffered from the last wars, Troyes has a high density of old religious buildings grouped close to the city centre. They include:

Several Troyes churches have sculpture by The Maitre de Chaource.

The inhabitants of the commune are called Troyens. 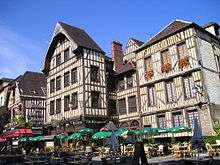 Houses in the old town

Troyes is home to the Lacoste company production headquarters, a popular clothing brand. It is also home of prize-winning chocolatier Pascal Caffet.[9]

The train station Gare de Troyes offers connections to Paris, Dijon, Mulhouse and several regional destinations. Troyes is at the junction of the motorways A5 (Paris – Troyes – Langres) and A26 (Calais – Reims – Troyes). Troyes – Barberey Airport is a small regional airport.

Troyes is the home of association football club Troyes AC, or ESTAC. ESTAC now plays in Ligue 1, the highest division of French football, having been promoted from Ligue 2 in 2015.

Troyes was the birthplace of:

Troyes is twinned with: