Mamoudzou (French pronunciation: ​[mamudzu]; Shimaore Comorian: Momoju[1]) is the capital of the French overseas region and department of Mayotte, in the Indian Ocean. Mamoudzou is the most populated commune (municipality) of Mayotte. It is located on Grande-Terre (or Mahoré), the main island of Mayotte.

The former capital of Mayotte was Dzaoudzi, on the small island of Petite-Terre (or Pamanzi), but Mamoudzou was chosen as the capital in 1977. In the 1985 census, 12,026 people were recorded in the main town.[2]

There have been environment concerns about marine pollution in the area; "important degradation in the quality of the coastal waters" between 1977 and 2007 has been reported in the Coral Reef Lagoon in the Mamoudzou–Dzaoudzi strait, and in the Mamoudzou–Majikavo conurbation.[3] 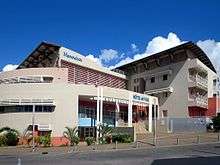 The town has a significant Muslim population.[6] 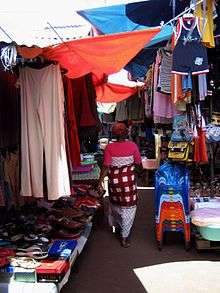 Mamoudzou contains a bank and shopping centre. The economic centre of the town is the Place du Marche, which contains the bank, Air France and Ewa Air offices, and the tourist office.[7] The headquarters of the magazine Jana na Leo, "primarily concerned with articles on social life of the island of Mahore", is published in Mamoudzou.[8] Restaurants of note in Mamoudzou include the Les Terrasses, Hotel Restaurant Isijiva, Le Barfly and Mamoudzou La Kaz.[9]

A ferry service is provided for tourists to the island of Petite Terre.[10]