Saint-Denis (French pronunciation: ​[sɛ̃.də.ni], or unofficially Saint-Denis de la Réunion for disambiguation) is the préfecture (administrative capital) of the French overseas region and department of Réunion, in the Indian Ocean. It is located at the island's northernmost point, close to the mouth of the Rivière Saint-Denis.

Saint-Denis is the most populous commune in the French overseas departments. At the 1999 census, there were 158,139 inhabitants in the urban area of Saint-Denis, 131,557 of whom lived in the city (commune) of Saint-Denis proper and the remainder in the neighbouring commune of Sainte-Marie.

Saint-Denis from the SPOT satellite

Saint-Denis's former city hall and the Column of Victory.

Saint-Denis was founded by Étienne Regnault in 1669 and became the capital of Réunion island in 1738.

The closest airport is Roland Garros Airport which is also the main international airport of Réunion.

The hotels in Saint-Denis include Mercure Creolia Hotel, Austral Hotel and Best Western.

IBM has an office in Saint-Denis.[1] 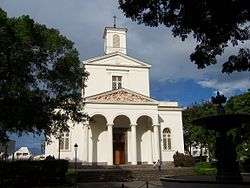 Prince Bảo Vàng of Vietnam (also known as Yves Claude Vinh San) the son of Emperor Duy Tân, was born and currently resides in Saint-Denis, Réunion with his family.

Saint-Denis, Réunion is twinned with:

Sentenced to exile in Réunion, the Moroccan Rais Abd el-Krim lived a few years in Saint-Denis from 1926.